Check out amazing @LyleBeniga‘s dance video.http://youtu.be/UU2OPadP56I  Me and Hyun-joong were watching it on the 2nd floor 🙂 Find us.

Netizens recently chose Kim Jaejoong and Kim Hyun Joong to be the two entertainers who would still meet as best friends, even when they are in their old age.

From the 23rd to the 30th, a survey was conducted by the community portal site ‘DC Inside’ entitled “Which Representatives From the Entertainment Industry Will Meet as Best Friends Even in Old Age?” and Kim Jaejoong-Kim HyunJoong ranked #1.

Gaining 531 (21.2%) of the 2,503 votes, Kim Jaejoong and Kim HyunJoong who have even lived together in one house before, easily took the lead. Through public broadcast they even revealed that they had exchanged letters with each other during their hard times, causing netizens to envy their close relationship.

Re-posted from: http://princejj.com/2012/10/30/news-121031-entertainment-industry-representatives-who-are-most-likely-to-meet-as-best-friends-even-at-an-old-age-kim-jaejoong-and-kim-hyunjoong/
Please take out in accordance with our rules.

Do not re-upload ,re-edit & erase the logo I don’t share anything with Ssangchu.

스테파니 ‏@5StarsAs1  The thing that Henecians should be proud of is that KHJ is the ONLY SOLO SINGER to top SUJU & TVXQ’s singles that were released in 2012 ^^
스테파니 ‏@5StarsAs1  And there’s a big gap diff too between 1st place KHJ & 2nd place Suju’s Opera Jap Single, a total of 25k gap difference (no offense here ^^)

If you move this video please write the original credit only.
Do not re-upload ,re-edit & erase the logo
( no capture & no flash video)
Do not move this video to everywhere that are related “We got married”

Tweets and  Photos Credit as Tagged:

@baebb:  <KHJ> he’s already on the way to airport.

read on weibo there were fans who sorta rushed into his room after he left… seems like they’d reserved that particular room; even told housekeeping not to clean the room or clear anything… also told manager to sell them the pillows HJ had slept on and the other items he’d used ^.^;
sounds so wrong to me ^.^;

(note though that not all fans are like this… there are other fans who have voiced their displeasure over this.)

BB ‏@baebb  <KHJ> read on weibo fans gave HJ a nice & warm send-off at airport. they even came up with their own cheer for him ^^
here’s what one fan who was there shared:
“one two three, three two onr, kim hyun joong, five six seven, fighting fighting fighting!” i suppose chinese fans’ cheer for Hj will be this in future! *thumbs up* hotel and airport send-off, kudos to the fans!
(bb: of course they had said it in mandarin, i’d merely translated the essence of the cheer)
BB ‏@baebb  <KHJ> Henecia_Euni weibo: We shouted our own cheer when we sent him off at the hotel today, and we also shouted the same cheer at the ariport, it was all done so cohesively! HJ seemed rather happy, and so am I!
转自Hencia_Euni微博：今天酒店送他也喊口号机场也喊了口号 特别整齐 金贤重挺开心的 我也很开心.
BB ‏@baebb  <KHJ> from Yi枫Chen影-看透’s weibo: The fans at the airport send-off were so orderly and well-behved today! Everyone was standing in line in an orderly manner. When HJ appeared, no one pushed or touched him, and everyone was shouting, “123 321 kim hyun joong 567, fighting fighting fighting!”HJ turned around to wave at us several times after immigration check. The interpreter unni said HJ’s very happy! It’s truly a touching and satisfying send-off this time, because of kim hyun joong and because of henrcia!

On 28th October, popular Korean flower boy Kim Hyun Joong made his first Chinese variety show appearance at Hunan TV’s. Happy Camp is known as the most popular variety show in China over the years and has featured many popular celebrities.

On set of recording, Kim Hyun Joong talked in Chinese, danced to Gangnam Style, played games with the MCs and acted cute. His fans showed great support for him and the recording studio was fully packed. Kim Hyun Joong’s 4D-ness also made everyone at the scene laugh and scream with excitement with every sentence he said. Also, he also imitated the eye exercise video which went viral online in China recently, his cuteness and funniness made fans, staffs and MCs to burst out into laughter.

KHJ followed all the 5 MCs at Happy Camp in Weibo! And tweeted ‘Yes..I came..it was really fun ytd..thank you.. 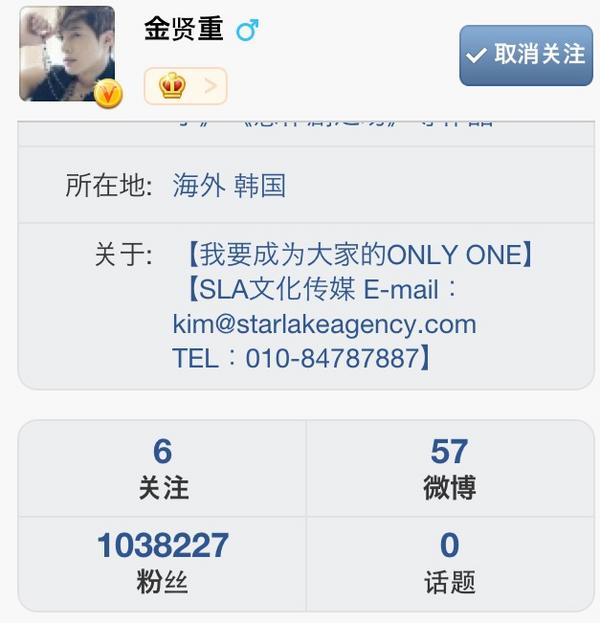 28th October, Happy Camp welcome popular idol Kim Hyun JOong, the audience seats are filled by female fans from all over the world. But, the most lucky one must be Haitao tonight! Today happens to be Haitao’s 25th Birthday, Happy Camp cast gave him a surprise. (hj not related part is omitted)

After Kim Hyun Joong came on to the stage, he gave HaiTao a big present. Actually, after he arrived in ChangSha, then he knew that its Haitao’s birthday, thus he prepared the present last minute and gave his favourite set of outfit to Haitao, making female fans off the stage to become very jealous of Haitao. During te game session, HeJiong lost and was punished to send a weibo to Haitao, saying “Let’s get together”, in a short 2 minutes time, causing thousands of repost and comments.

via Hunan TV
Translated by : http://www.babyvfan.wordpress.com

28th October, popular Korean idol came to ChangSha to record for “Happy Camp”. Aside from his fans welcoming screams and passion, originally free-of-charge entry tickets were sold at high prices in black market, this also proves the high popularity of this flower boy. The high price of 3500 yuan per ticket scared off many fans. However, even after the recording has started for sometime, there were still fans waiting outside recording studio, hoping to catch a glimpse of their idol when recording ends.

As the most popular variety show in Mainland China, “Happy Camp” tickets for every season is hard to get, not to mention when it comes to guest star Kim Hyun Joong. Before him, Lee Min Ho and Jang Geun Suk have already made a high record for ticket price. This time, when the news of Kim HYun Joong to record for Happy Camp was released, the supposedly free-of-charge was first sold at 1300yuan, and raised to 3500 yuan before the recording.

When the recording drew nearer, more and more fans started complaining about “tickets are hard to get”. Reporters at the scene saw many illegal tickets sellers hanging around the TV station from noon onwards, selling tickets to passers by. Right before the recording, reporters heard that the tickets have raised to 3500 yuan, and ticket sellers are willing to buy in tickets at 2500yuan. Ticket sellers also complained at the high buy-in prices.

Staying with idol at the same hotel

Fans from all places, started to pour into Changsha since midnight, fans have been chasing their idol ever since. As the hotel Kim Hyun Joong is staying at is very near to TV Station, many fans have been waiting outside since morning, watching their idol’s every movement. “oppa is out for rehearsal!” , “hotel staff brought in lunch for oppa!” and fans who were watching live recording also updated weibo with their idol’ performance.

Kim HYun JOong not only attracted fans from Changsha and China alone, but there were also may fans from other countries. They do not wis to miss any chance to be with their idol and many also choose to stay at the same hotel as him, so they have a chance to meet their idol. Of course, rooms near Kim HYun Joong’s villa has become the hot choice. Many hotel staffs also expressed that, besides from hotel events on other days, this place is seldomly so lively.

Causing screams even if he is just standing there doing nothing.
“Hello everyone, i’m Kim HYun JOong, i miss everyone.” Using Chinese to greet the fans, seems to become every korean star’s introduction. In the midst of screaming, Kim Hyun Joong finally made his appearance. Due to language barrier, kim hyun joong’s recording focused mainly on games, the whole recording runs little on words. But even so, fans in the audience are very satisfied, even the very familiar videos that they have watched many times online, was able to cause their high decibel screams.
In front of Kim Hyun JOong, Happy Camp casts can only come second. During game session, his every little achievement is able to make fans to get excited for a long time. Show staffs told the reporters that, under strict control, today’s recording studio do not have the usual problems of ‘exploding in number’ and ‘additional chairs’. Reporters also noticed that when Kim hyun Joong was on stage recording, there were around 5 staffs busily involved, a near 1.9m body guard was also standing beside the stage, always ready to go. During mid-session break, Kim hyun Joong went to the restroom, causing many fans to follow along, security guards have no choice but to sprung into action immediately to keep order, was able to see his high popularity.