What a BUMMER (pun intended) ! Hyun Joong loses his pants & loses the swimming race with a kid! 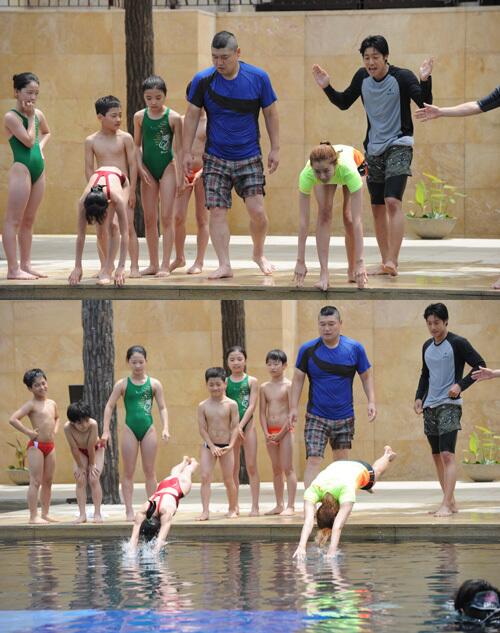 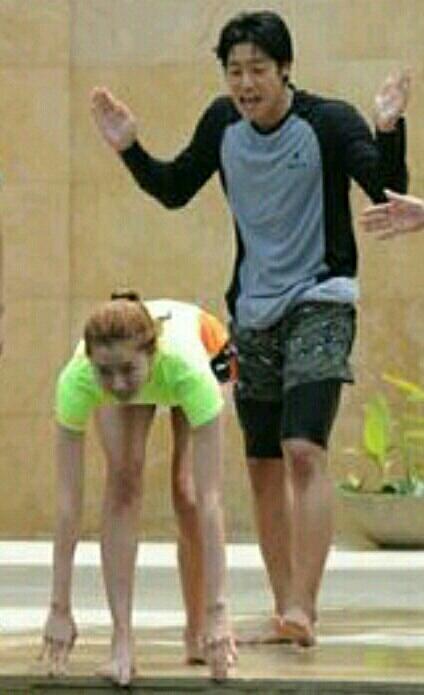 Shared by @5StarsAs1:
I think this is beneficial to share with all Henecians or KHJ fans out there before his Korean comeback very soon

P/S: Google for the tutorials. There are tons of tutorials available on the net.

Note:
For the free intnl-calling app, I don’t think it’s available outside US (or at least for Android users, iPhone users’ feedbacks?). But don’t worry, it won’t cost you much even if you do not use the app to send your text message globally since you’ll only be sending two messages per week 😀

After School’s Uee showed a healthy body in a diving bathing suit at the pool recently.

To prepare for an episode of SBS’ “Good Sunday – Barefoot Friends,” Uee participated in diving practice, showing off her figure. She has been practicing since June 14 at the pool located at Han Hotel in Seoul, according to Star News.

Although she was in and out of the water several times for practice, just like a swim athlete, she showed no signs of exhaustion or fatigue. The diving coach assigned for “Barefoot Friends” said, “Diving and swimming are two completely different sports, but I think that compared to the other members, swimmer Uee has a good shot at coming out first place in the competition.”

Filming staff and directors mentioned that Uee looked like a mermaid and that her swimming suit made her look like a real athlete.

On another note, the members of “Barefoot Friends” will participate in diving training and activities for the summer, and there will be a diving competition at the indoor gymnasium for the Masters Diving Competition on July 11.

How do you think Uee will perform?


내 친구, 정말 감사 합니다. ^^ ❤ please thank the video owner who took such a great fan cam. She is very kind hearted for letting me sub and share to all Kim-Hyun-Joong fans around the world. I LOVE THIS SONG SO MUCH MAKE ME T-T JUST BEAUTIFUL﻿ SONG. ❤

These subtitles fits to all versions of episode 10. Enjoy:):):) {Not mine I’ve just uploaded It and synchronized it to fits all of the versions} 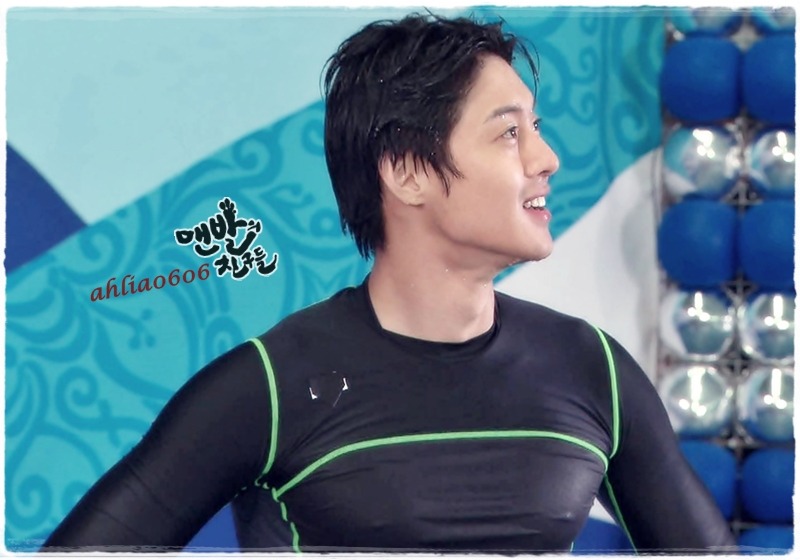 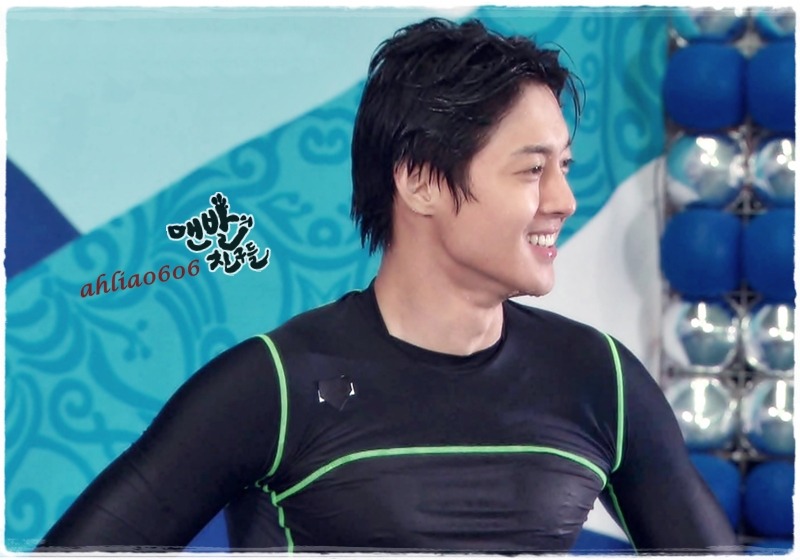 Stephanie: MVP is going to be hard. Hmm… unless we go with Hyori.

Cherry Cordial: I know, another week where there’s no clear winner. And, yes, I did consider Hyori again, since I said more than once that I’ll miss her.

Stephanie: She cooked, picked Ho-dong’s pocket, and led the game really well. OH. And most importantly — she was on camera with NO MAKE UP.

kfangurl: I was impressed by that too… though Uee also didn’t wear makeup right?

CC: I think so. Don’t know why it made such an impression that Hyori didn’t.

kfangurl: She didn’t go under the falls though… which I thought was a little odd since, up to that point, she didn’t miss out on any of the stuff the team has done.

Stephanie: I’d say if there were any place that you should pull your star card it was jumping into a freezing cold pool. Like, “Uh. No. Not gonna, can’t make me.”

CC: I was expecting her to have a go, too, since everyone else did.

Stephanie: Well, I think jumping in the pool really was like a BFF team-building exercise, and she’s not officially a friend.

CC: I did think it was odd, but thought it was all about the BFF team, too.

kfangurl: That’s how I rationalized it too, though I would’ve given her serious points if she’d done it.

CC: Yep, there would’ve been a clear winner then. As it is, she’s a contender, based on it being her last episode.

Stephanie: I think even without the dive, she’s pretty clear above everyone else.

CC: And when she told Ho-dong it was the last time, I felt so sad.

Stephanie: Cherry and I were talking about that — we started out really not liking Hyori and, in the course of these episodes, have gotten to really like her. That’s skills.

kfangurl: I liked how she kept hugging Ho-dong and how Ho-dong kept looking distressed by it.

CC: Yes, she showed that she could be sweet to him too, not just bicker. Although, you saw how worried Ho Dong was when she was sweet.

kfangurl: Yes, she doesn’t seem malicious at all. She always comes across as just playing, but playing hard. She’s no softie, that Hyori.

Stephanie: So — I think in honor of her last episode we should totally give it to her. She earned it. Otherwise, I’m just going to vote Hyun-joong again — don’t make me do it!

kfangurl: My favorite quote happens when the team members all try to persuade Ho-dong to sleep inside. Hyori, barely concealing a cheeky grin, pipes up to Ho-dong’s embarrassment:

“Oppa, want me to sleep next to you?” AND, she proceeds to demonstrate, too. Snicker.

Stephanie: I snorted when Hyun-joong says:

“Do you want to trade kimchi for Si-yoon’s autograph?” I just think it’s so funny he offers up Si-yoon instead of himself.

Cherry Cordial: While guessing Uee’s Up words, Si-yoon says, “You are really pretty.” Then Hyori says to him:

Hyori [flirtatiously]: You look really pretty saying that.
Ho-dong [to Hyori]: You are pathetic.
Hyori [pouting]: I don’t get to see handsome men these days.

Hyori, for the record, I completely agree with you!

kfangurl: I couldn’t get over this cute moment, where Si-yoon pulls Hyun-joong to him in an embrace. Giggle. And, SQUEE!!!

Stephanie: Seriously guys. How could I choose anything other than Si-yoon hugging Hyun-joong. Wait. What? kfangurl already snagged that one?? G-dang it! Fine. Second choice?

For the obvious fan-girl moment.

Cherry Cordial: With my new appreciation for Hyori, mine has to be her reverse psychology when she offers to sleep next to Ho-dong if he insists on sleeping outside.

Question: Who would have been WAY more excited to find two stars on your doorstep?

And Now for Our Goodbyes

Well, faithful readers, our time as your Barefoot Friends team has come to an end. We’ve had lots of fun talking with one another and with you — not to mention squeeing over Kim Hyun-joong.

Let’s all hope together that our show — and our dear Barefoot Friends — does well!

These numbers are mid year + one week.
Meaning I have used the updated numbers from the mid year Oricon charts but there is an extra week (last week’s sales) included so numbers will be slightly higher than Oricon’s mid year for items still charting.

So the theme for 6.23 and 6.30 episodes of Barefooted Friends is “Overcome the fear of diving”.