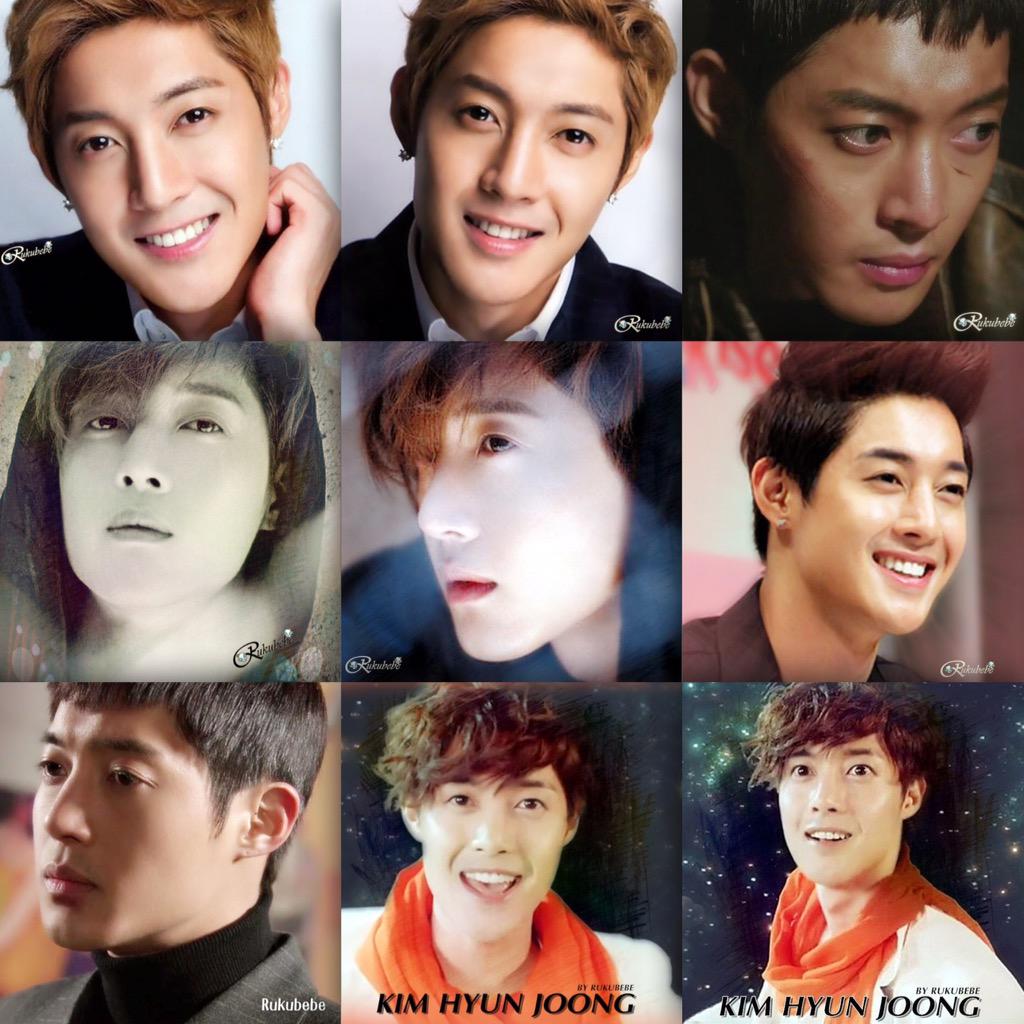 According to KE HJ's photo circulated online was taken while he was out of camp on 25th. He returned evening therefore not attending wedding

KE was kind of fast today… Guess it was interfering with the otherwise blissful publicity of the wedding..

KE – At the time he was on duty with a more senior soldier in the vicinity and returned to camp that same day.

KE: Pic was taken on 7/25. HJ was out on duty with another senior soldier and returned back to camp on the same day. He was not on leave.

Many pertinent questions brought up by that latest KBS interview Cr@倪嘉路Karenkim13 pic.twitter.com/lDM7uTZgia

Apologies if there are mistakes

Aftr 2nd hearing HJ's father said HJ is doing well in army, thou he has bn unable 2talk 2him very often cuz of his MS http://t.co/aZ8OBX3MFQ

KHJ side filed a criminal charge against A and submitted a ban on her departing SK, because severe punishment is likely per evidence

Singer-actor Kim Hyun Joong, who is currently serving in the army, has officially counter-sued his ex-girlfriend, Ms. Choi. In response, Ms. Choi’s side is also preparing to take more legal action.

According to insiders on July 23, Kim Hyun Joong’s legal reps have filed a petition against Ms. Choi on charges of false accusations, blackmail, defamation, and fraud lawsuit. Furthermore, they have put in a request to prohibit overseas travel to prevent Ms. Choi from leaving the country.

Kim Hyun Joong’s attorney, Lee Jae Man, explained to Star News, “In the midst of the current 1.6 billion KRW (approx. $1,426,000 USD) lawsuit, it has been revealed that the ob-gyn, where Ms. Choi claimed in her petition that she received her pregnancy confirmation and treatment for miscarriage, has never confirmed that diagnosis.”

“Also, we saw a problem with the fact that Ms. Choi went to Hospital A and Hospital B on the same day, stating ‘injury at a gym’ at Hospital A, and ‘physical assault’ at Hospital B for the assault charges of a six-week treatment diagnosis. We have decided to file the lawsuit because these claims appear to be lies.”

On the other hand, Ms. Choi’s attorney has responded, “Not only the defendant (Kim Hyun Joong)’s attorney, but also external sources are saying that Ms. Choi blackmailed him for 600 million KRW (approx. 517,400 USD), but that is clearly defamation. We have never demanded any amount of money. In response to this, we will be countersuing. We will immediately file the petition on July 23.”

So 1 million won asked from each of 100 netizens…Total 100 million won…Sounds like a scam.. And via HP.She has a thing for text messages

Planned for charges against A postdelivery but brought forward to prevent flight overseas. Inx requested after birth https://t.co/a5n6leweUA

Another news coverage from TW : A sued for assault but HJ countersue A for blackmail & defamation! https://t.co/3n7FYyoIHb

(Sohu News) Much questions surrounding A who had failed to provide proof of pregnancy [搜狐娱乐]金贤重前女友疑点重重 未能提供怀孕证据 http://t.co/2FnguDyzDn

김현중한테 사과하러옴..-[김현중갤러리] An apology to KHJ by a netizen for misunderstanding n a promise to spread HJ's truth online.😄 http://t.co/dq2eayNHNn

김현중한테 사과하러옴..-[김현중갤러리] An apology to KHJ by a netizen for misunderstanding n a promise to spread HJ's truth online.😄 http://t.co/dq2eayNHNn

[KHJPowerfulS] Food Support to Atty Lee office on one of d hottest day of a year^^ Thank u so much! AttyLee fighting https://t.co/7rUQwrxO1G

Pls note it is only summary trans, not a partial trans, just to relay u d gist of what ajussi wrote. Hope it still helps~

KHJ sued Choi for false accusation, defamation & etc and also submitted a ban on departure from the country.

Many Many Thanks to all our generous translators ………..  Again, sorry for the late update

KHJ vs Ex-gf, 2nd hearing today (22nd)…will there be pregnancy evidence? KHJ side is expected to submit their statement for counterclaim

NO pregnancy, KHJ vs -2nd Round. Closed Hearing today (22nd) will be held at 4:30PM. Only legal reps will be present.

HJ vs A 2nd hearing, issue:  whether 1st pregnancy was fact. KHJ side asserts A was neither pregnant nor miscarried by assault

KHJ vs A, 2nd Hearing, what’s the issue? KHJ side asserts A’s pregnancy/assault claims all false per OB&G and Orthopedics record

KHJ vs A, 2nd hearing on 22nd, issues. KHJ side is expected to submit statement regarding 1.2BW damage/penalty counterclaim

KHJ vs A, 2nd hearing, evidence for pregnancy? Per statements of fact from clinics found no pregnancy and false claim about assault

1.6BW suit: KHJ side “will trace A’s bank account. By tracing bank account… we can find how many are involved. too big for 1person

KHJ’s legal counsel requested ban on A’s departure from SK. Investigation can be done after delivery but the ban was requested

KHJ side, will respond immediately, if A files criminal charge for defamation. KHJ side will respond by filing charge too.

[OSEN] Seon:  “A never specifically mentioned the amount of 600MW.” “will file defamation criminal charge against Atty Lee, who made a false claim of 600MW”

KHJ v A:  5 new issues. 3rd hearing is set on Sept 23.   A: have evidence of text messages and need more time because there are so many.

One sentence by Seon didn,t make sense to me so i marked with ?? It has no real content in it so pls understand.  I chose dat article cuz it has 5 issues in detail that help understand new development happened in 2nd hearing. Hope it helps^^ thank u!

KHJ sued A for false accusation, extortion, litigation fraud & submitted ban on departure from the country on 7/21.

KHJ filed criminal charge against A,  And requested ban on departure from country and investigation after delivery

KHJ side filed criminal charge against A and requsted ban on departure. A knew she wasn’t pregnant but falsely claimed and sued

Another news coverage from TW : A sued for assault but HJ countersue A for blackmail & defamation! https://t.co/3n7FYyoIHb

Crazy A bitch is so greedy! Demand 1milwon fr 100 netizens (100milwon in total) 😡😡😡Netizens should sue her back! https://t.co/NZIvcHfIPb

Seems choi has some connections with several related ppl https://t.co/E0PkurVWGo

Attny Lee said "A" likely escape abroad after delivery coz she has some connections with other related ppl.

After court hearing is finished, A's attny said they'll submit text msg as an evidence coz there is msgs that hj accepted hr pregnancy.

3rd court hearing will be held coz there werent enough evidence https://t.co/FCO2SfZfJU

Attny Lee will track A's bank account to find out who is behind hr.Its hard to carry out this case by all hrself. https://t.co/Wiv0CnzF14

There's rumor that "A" escape country. KHJ side requested prohibition of departure https://t.co/wunxOkdZd3

HJ wanted sue A's laywer coz he got so many bad comments by his interview but attny lee stop him coz its not right during court hearing.

A's lawyer: After the trial, our official stance will be unveiled through press releases. We can't tell you yet what documents we prepared.

Next trial on 23 Sep as no progression made today. Her side is still not providing proof to substantiate 1st pregnancy/miscarriage.


Singer-actor Kim Hyun-joong has initiated criminal proceedings against his former girlfriend, who is allegedly expecting his baby, according to judicial officials Thursday.

After being embroiled in acrid public disputes, Kim decided to file the suit against his ex-girlfriend, surnamed Choi, for “calumny, blackmail, defamation and fraud,” along with a petition to forbid her travel abroad.

Moreover, Kim’s attorney said, “The maternity clinic where Choi claimed that she got the diagnosis has verified that it never confirmed such a diagnosis.” He also denied Kim’s alleged physical assault, citing Choi’s inconsistent testimony. Further investigation will proceed later in September, soon after Choi’s expected delivery.

Choi, however, reacted strongly against Kim’s claim, saying she will countercharge her former lover, heralding further intensified conflict between the two.

“The defense counsel is constantly insisting that Choi has extorted 6 billion won ($5.1 million). His claim is not true and thus evident defamation,” the lawyer from Choi’s side said in return, adding, “We want to make it clear that Choi never asked for that money.” He further announced that he would lodge a separate formal complaint on the woman’s alleged libel immediately.

In April, the singer’s former girlfriend brought a 16 billion won damage suit, claiming she was pregnant for the second time; the first one ending in miscarriage on account of alleged assault by Kim, causing injuries requiring six weeks in the hospital.

There has been doubt of her assertion, however, as she refused to hand in a medical certificate to prove her pregnancy alongside Kim’s alleged assault.

Legal representatives for Kim Hyun Joong expressed their concern about the possibility that his former girlfriend could be a flight risk, following recent reports that she is allegedly unable to confirm her pregnancy.

A report published by the Korean outlet Hanginu News,explored concerns regarding the woman known as A or Choi. “Ms. Choi, his ex-girlfriend, might try to escape abroad,” said legal representatives for actor and singer, Kim Hyun Joong.

The article went on to address the on-going case, whose upcoming hearing has been scheduled for September 23.

While his ex-girlfriend continues to allegedly state that she has evidence of her current and previous pregnancy, legal representatives for Kim have eluded to conflicting evidence. “Ms. Choi’s side stated their is a witness who can prove she is pregnant,” said a representative for the SS501 member. “But our side is ready with a witness who can confirm the fact that there is not enough data supporting [Ms. Choi’s] pregnancy.”

The member of Kim’s legal team continued to discuss the possibility that his ex-girlfriend could attempt to escape Korea, as she approaches the conclusion of her alleged pregnancy. “The end of the second trimester of her pregnancy is approaching and there are several parties involved on Choi’s side,” said the representative. “There is speculation that she is likely to escape overseas.”

Kim Hyun Joong has faced on-going legal woes since August 2014. In June 2015, his ex-girlfriend failed to provide evidence that she was pregnant. This potentially negated reports that date back to February 2015, where she announced that was carrying the Hallyu star’s child.

His legal representatives recently stated that the star was considering a counter-suit against his former lover, as she has failed to produce evidence of her pregnancy and injuries that were allegedly sustained by assault from the singer-turned-actor.

Meanwhile, Kim continues to adhere to his period of mandatory military service, with his members from his legal team addressing the media.

Lawyer in report says it deems KHJ’s new evidence give him a little edge; it is fact that KHJ got defamed by A’s pregnancy/miscarriage/abuse claim.

ENTWKLY KHJ “will demand additional compensation” “because of defamation, addtional demand compenastion and aggravated damage will be made

ENTWKLY KHJ, “will demand compensation” A stated injury at gym by health equipment in Orthopedics but claimed injury by KHJ

KHJ, “does biking during pregnancy make sense?” Atty Lee has proof of no pregnancy at that time and revealed ultrasound pic w/o fetus

KHJ’s side requested to revisit assault, because there’s no evidence of his assault on A. To prove it, statements of fact were requested to orthopedics -1

-2) and requested to court to review the investigation record of the short prosecution. KHJ said, at the time of police investigation, “there’s light struggle

-3) “there’s light struggle in the process of separation but neither repeated assaults nor violence to require 6wk injury.”

-4) it will b interesting to see whether KHJ’s assertion will be accepted by the court.