KHJ filed criminal suit agnst Choi in07/2015. Why r no reports made abt its investigation? When wl prosecutor indict#김현중_명예회복 #Justice4KHJ

1. Per article for non-related case, once a criminal case is filed, police must send it to prosecutor within 3 months.

2. If that’s d case, HJ’s case must be at prosecutor’s office, considering the investigation began early this year.

criminal case: prosecutor's office concluded the case as 'no charges in all four accounts.'

Nothing changes. HJ appealed! So we stay strong as we have done and pray even harder. Aja!!! We've got to see #Justice4KHJ prevail!!!

Per articles, prosecutor's decision was made on May19 & its reported now! Bloody media control! Why now? 2wks b4 July8, civilcase courtday?

HJ’s manager handed over the mosaic art to HJ. He said “Thanks to all of u, I’ll do my best more.”

DC gallery has delivered the congratulatory messages, emails and letters to HJ. Too many letters to snap pics ^^ https://t.co/4xfcUeORdN

Reading CJes' firm response against trash media's biased reporting on the case, make me want to slap KE for their incompetence & cowardice😡😡

10 times we were happy that Kim Hyun Joong was born

June 6 is Kim Hyun Joong‘s 28th birthday (29 in Korean age)! While I’m sure the birthday boy will receive his fair share of gifts, his birthday is also a gift for the many fans who enjoy his work. Here are ten times we were happy that Kim Hyun Joong was born:

1. When he gave us Second Lead Syndrome

There are few dramas that had the audience split between the male leads like Boys over Flowers did, and we can thank Ji Hoo for that.

2. When he wooed us with his voice

3. When he made us dance

4. When he convinced us that he was both completely adorable…

5. But also a legit street fighter in his latest drama Age of Feeling.

We’ll help you tend those wounds!

6. When he melted our hearts with a single smile

7. When he wasn’t afraid to pull off basically any hairstyle

Don’t you love his shaggy, auburn look from Playful Kiss? How do you feel about this latest ‘do with the blonde top?

8. When he had a giving heart to match his kind face

Kim Hyun Joong is known for donating both time and money to a wide variety of causes, from disaster relief to scholarship funds.

9. When we wanted to make him laugh like this

10. When he kindly demonstrated the value of physical fitness

Vivi is an unapologetic Korean drama addict and blogger. She blogs with her K-drama best friend Coco at Kdrama Fighting! In her free time, she likes to bring her commentary to the DramaFever crowd.

Sorry for the late post.  we were quite busy preparing for the Upcoming HP Event …


The day Henecia’s Brightest Star is born is now being celebrated around the globe.  Here’s wishing our celebrant ALL THE BEST to come …..

A birthday celebration at 기깔난닭 which, is still under the care of HJ and his mom albeit under a different name pic.twitter.com/nF3kwp1PTw 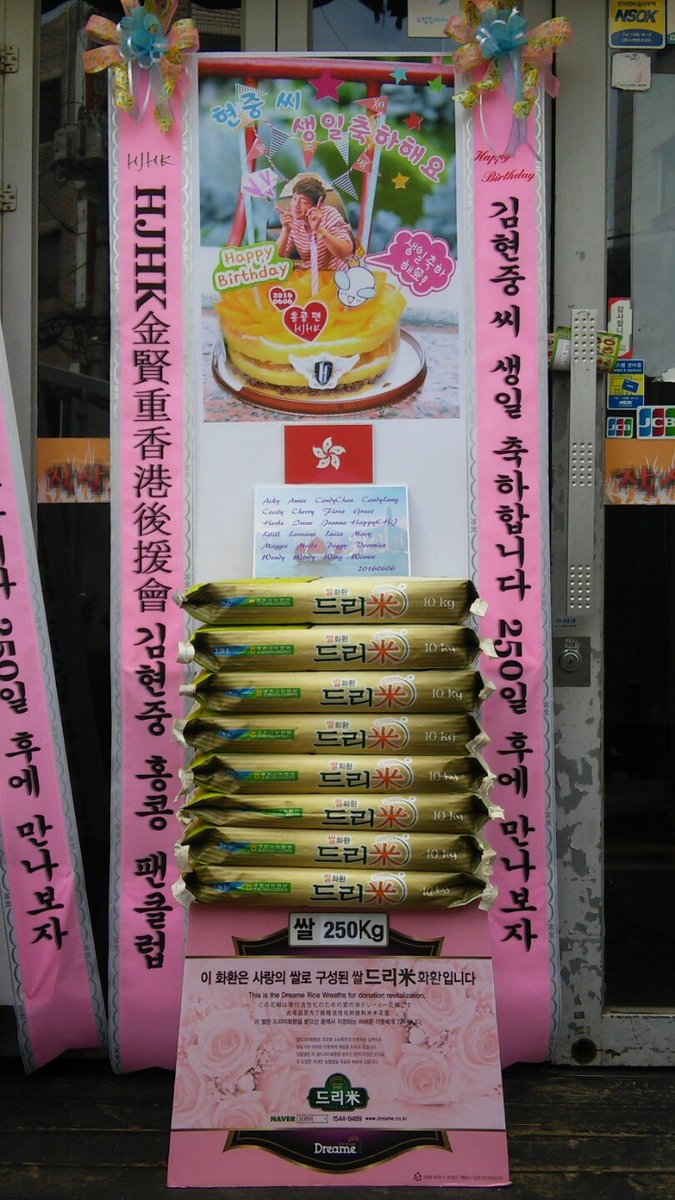 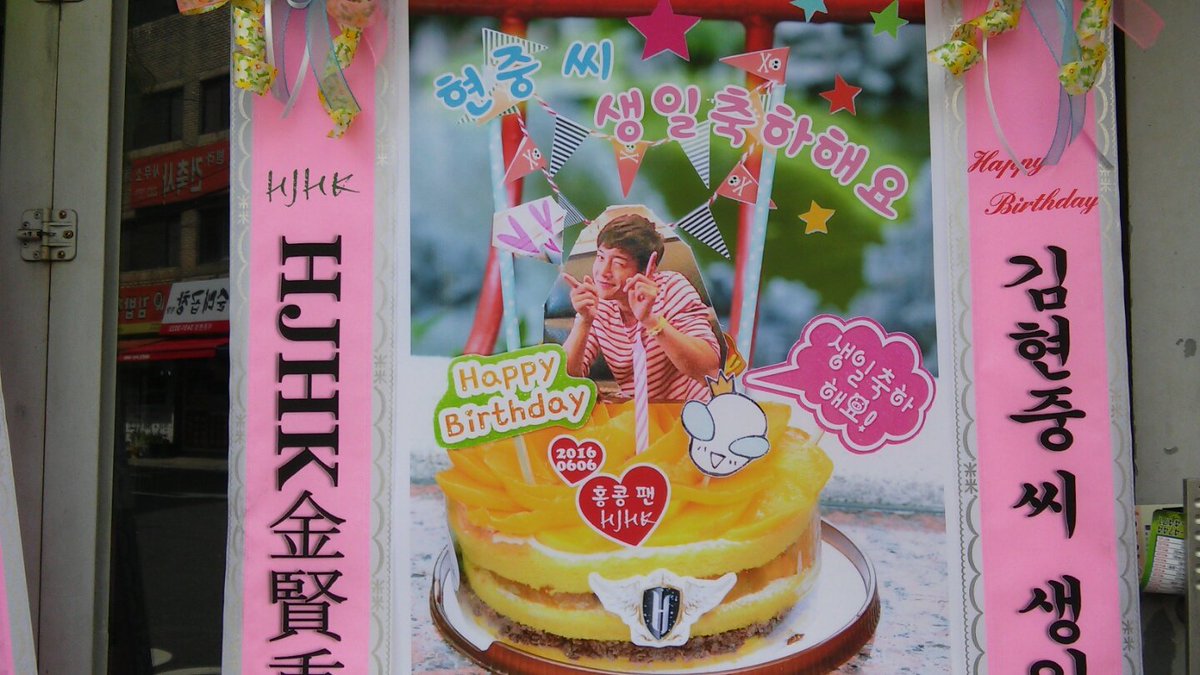 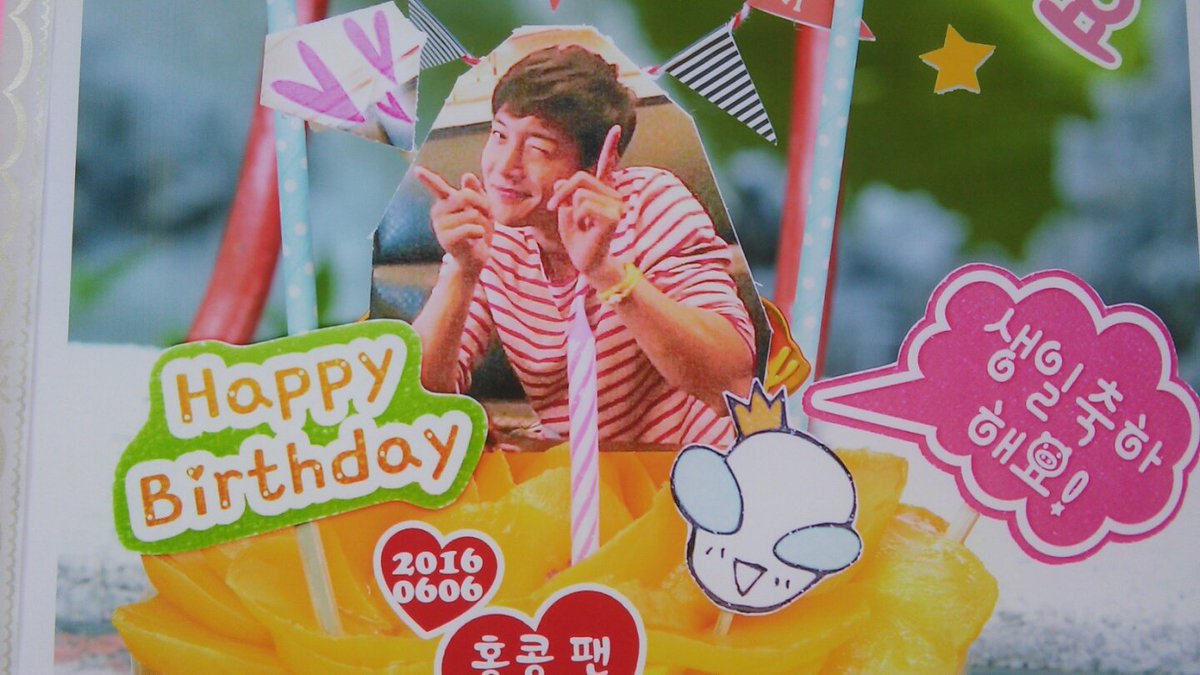 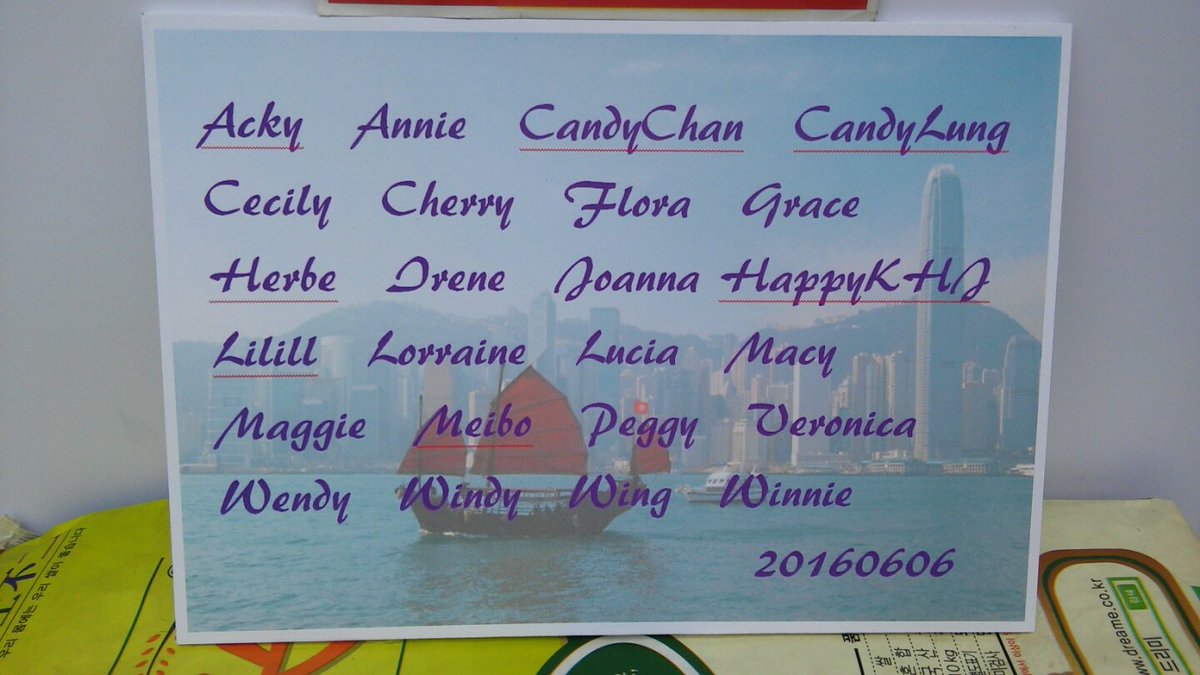 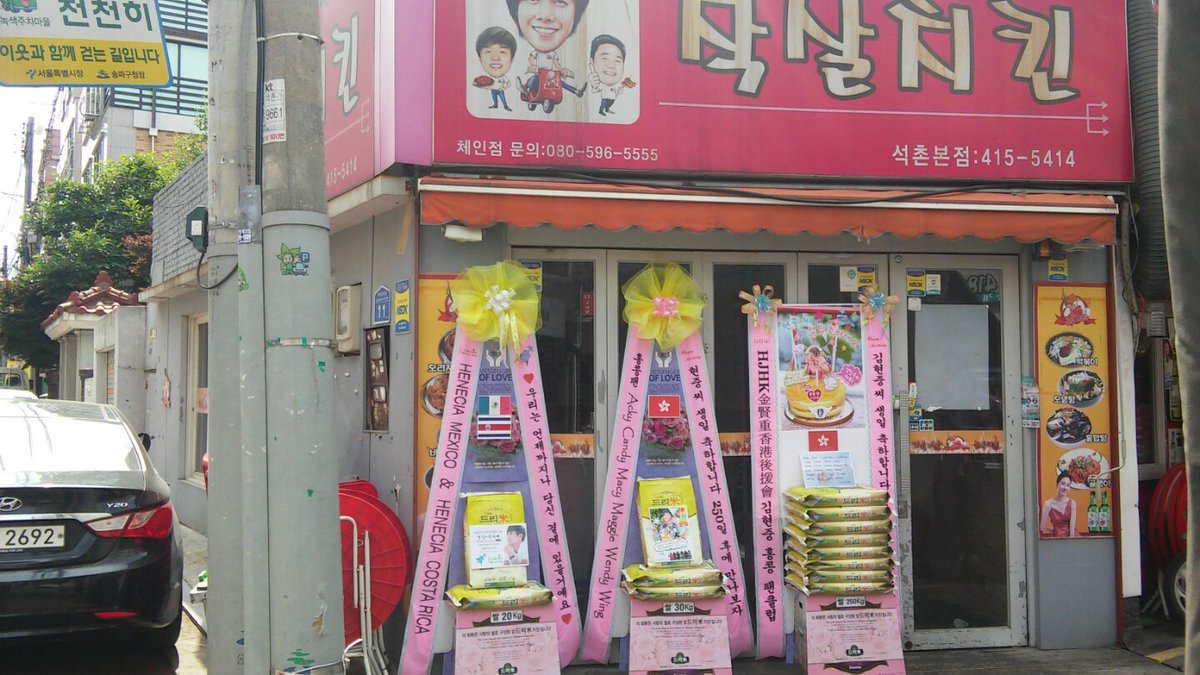 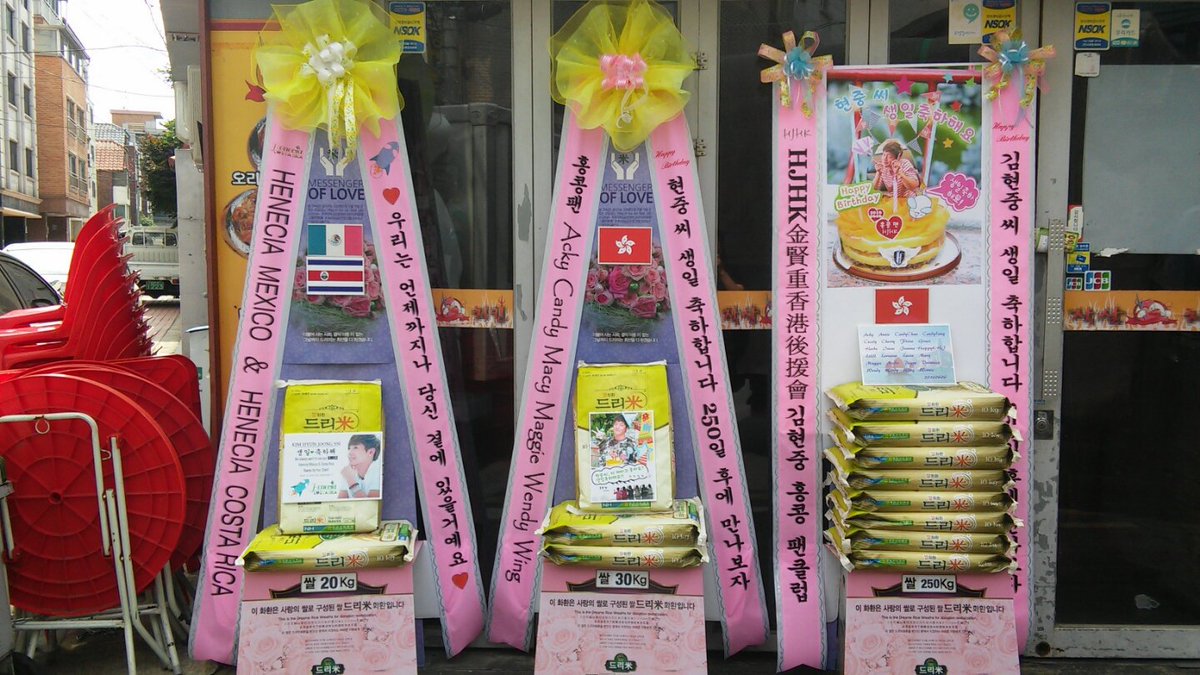 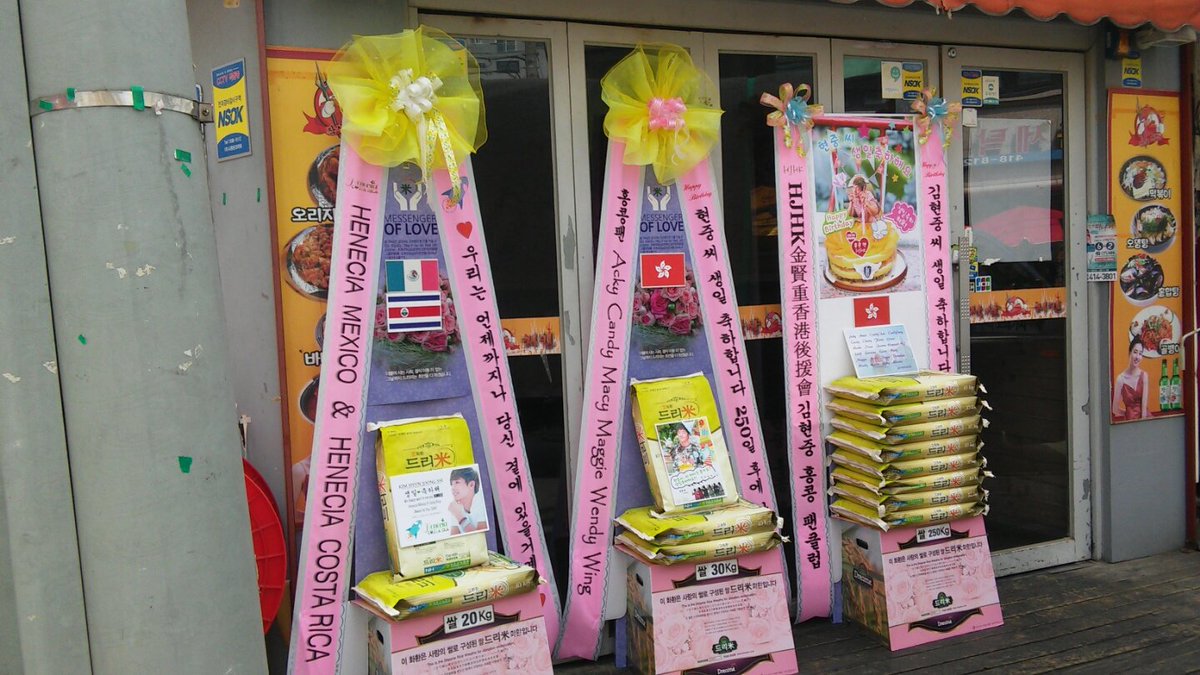 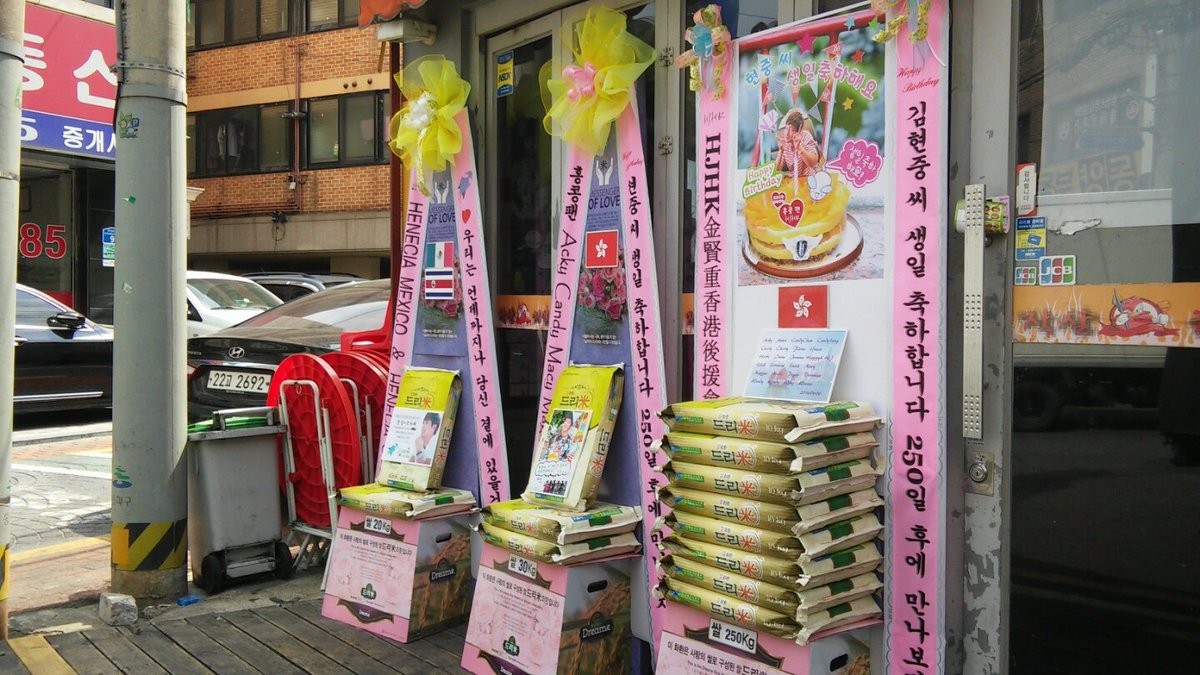 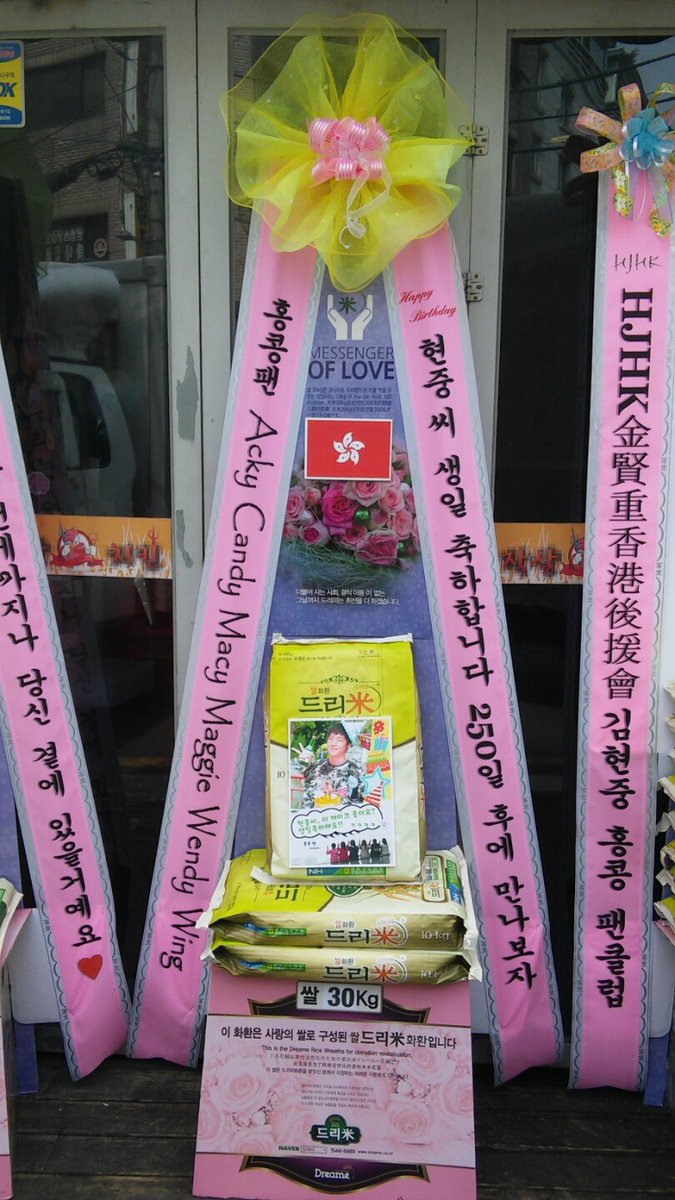 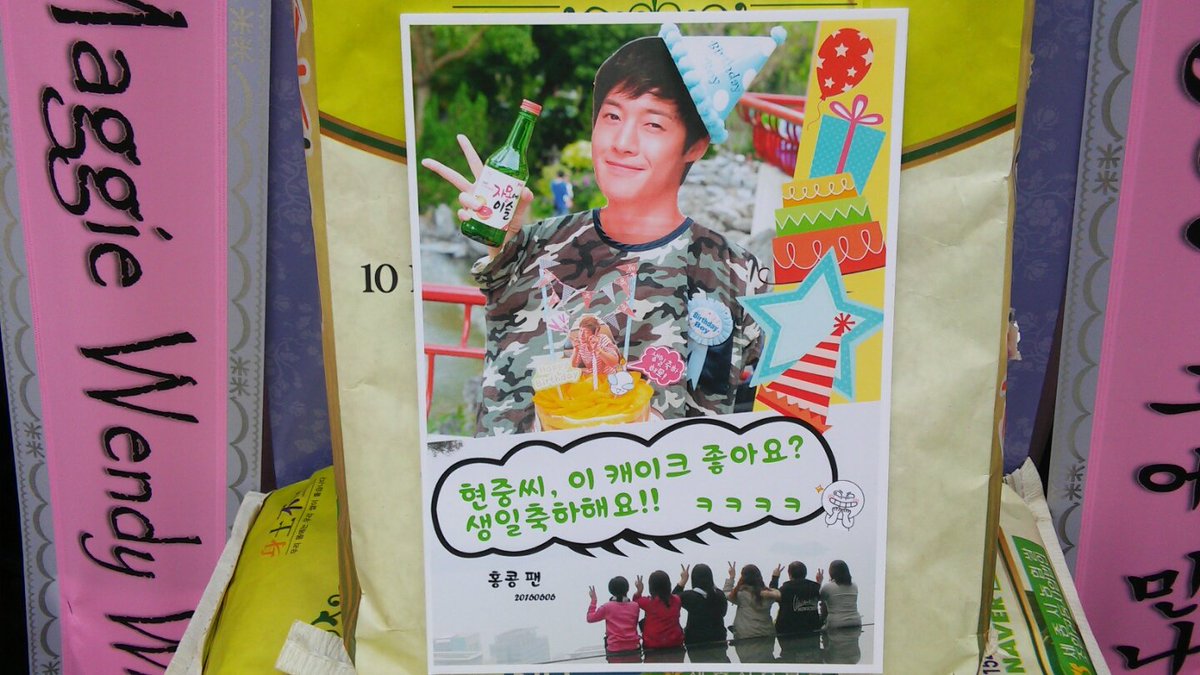 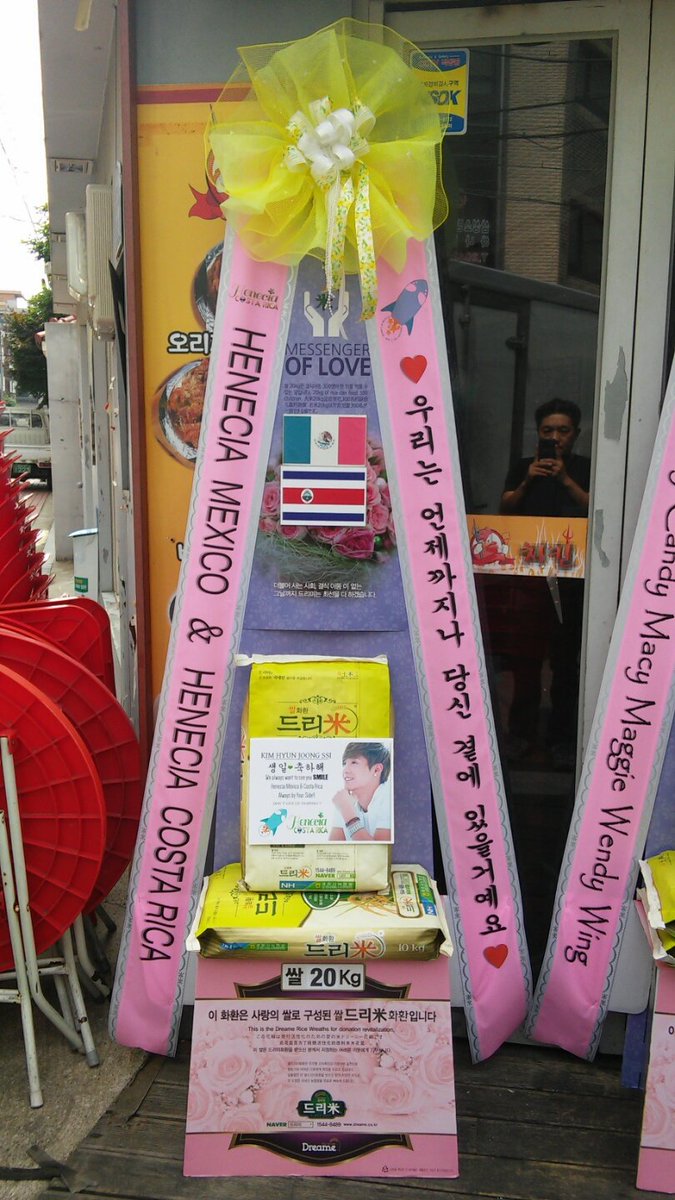 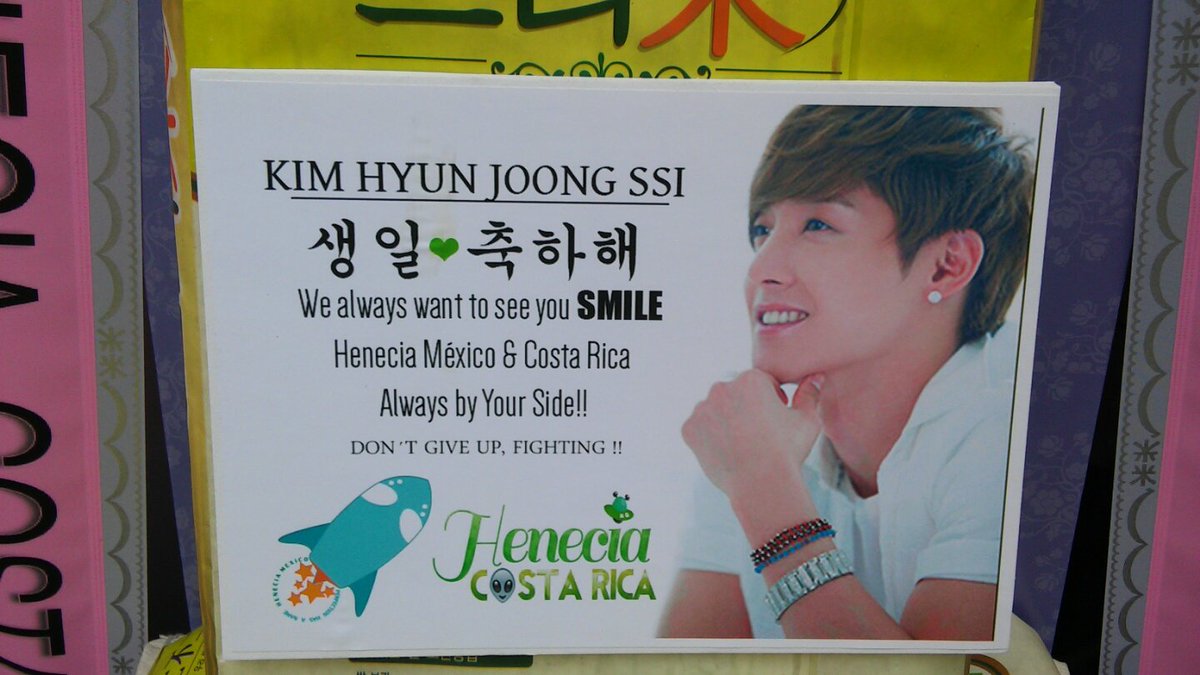 #Henecia_India Charity project 💚
The one who inspired us to do it is our only one #KimHyunJoong#HappyHyunJoongDay ❤ pic.twitter.com/Xx2VJVDVIO

Today is indeed a very #HappyHyunJoongDay because fans around the world are celebrating in his name❤(1)️ Cr Ph2 pic.twitter.com/gkqBsteh8L

Cr Ph2 who tried to compile pictures of birthday cakes for HJ from fans around the world ❤️(2) pic.twitter.com/q7yb2VWEQC 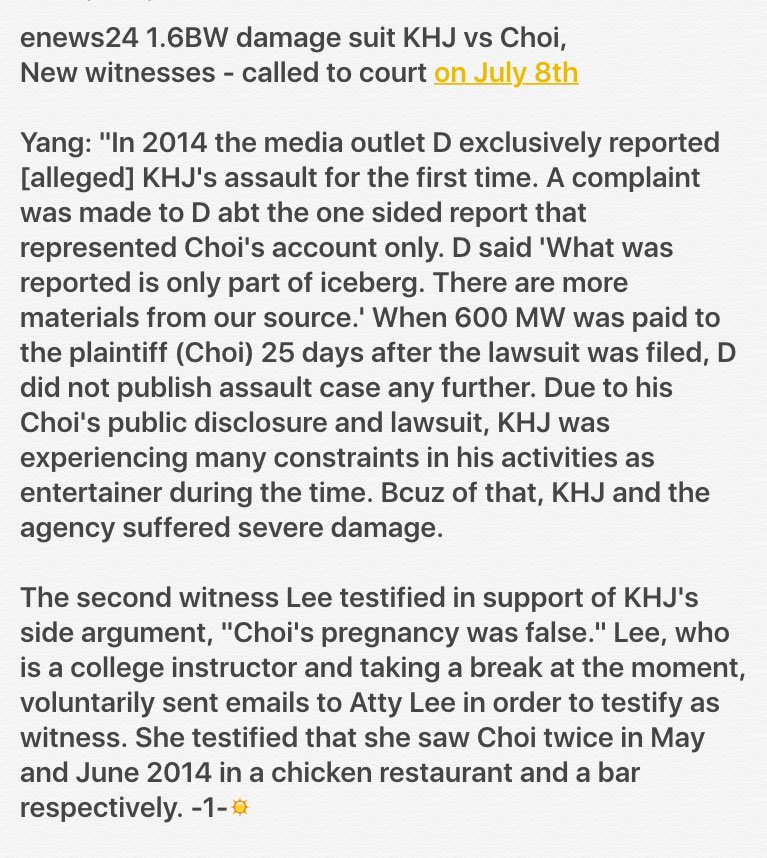 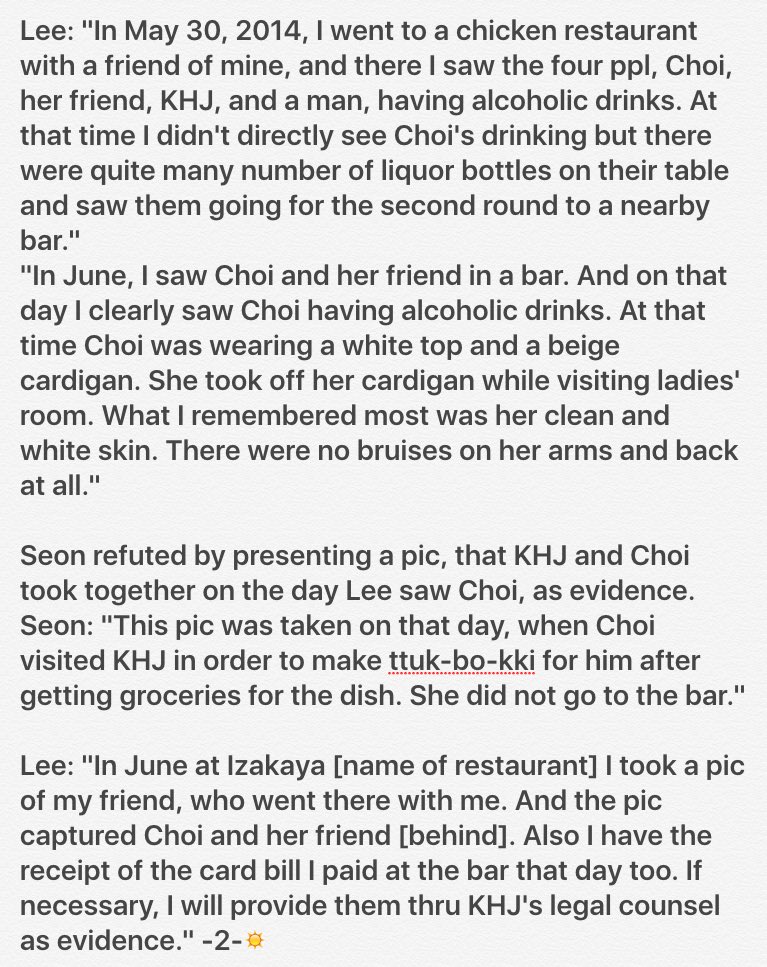 Thou 🐽 claims they lived togthr, he alwys uses d word "VISIT," whenever he talks abt A's going 2HJ's house. Lies leak one way or another.👈🏼

What a daebak witness! Lee even has a pic of her friend wth A/A's friend captured smwhere behind. Smart phones store exact dates of selfies.

Next court day wl b at 2PM, July8 & closed. A wl b questioned first, then HJ, & cross examinations if needed. https://t.co/wUuews6Nzx

Articles differ in who said d comment wth S** name in it. Many said it was Yang; some, Atty Lee; others, KHJ's side; some didnt mention it.

My understanding is that the court wl set a separate day for ruling after all due process is over. 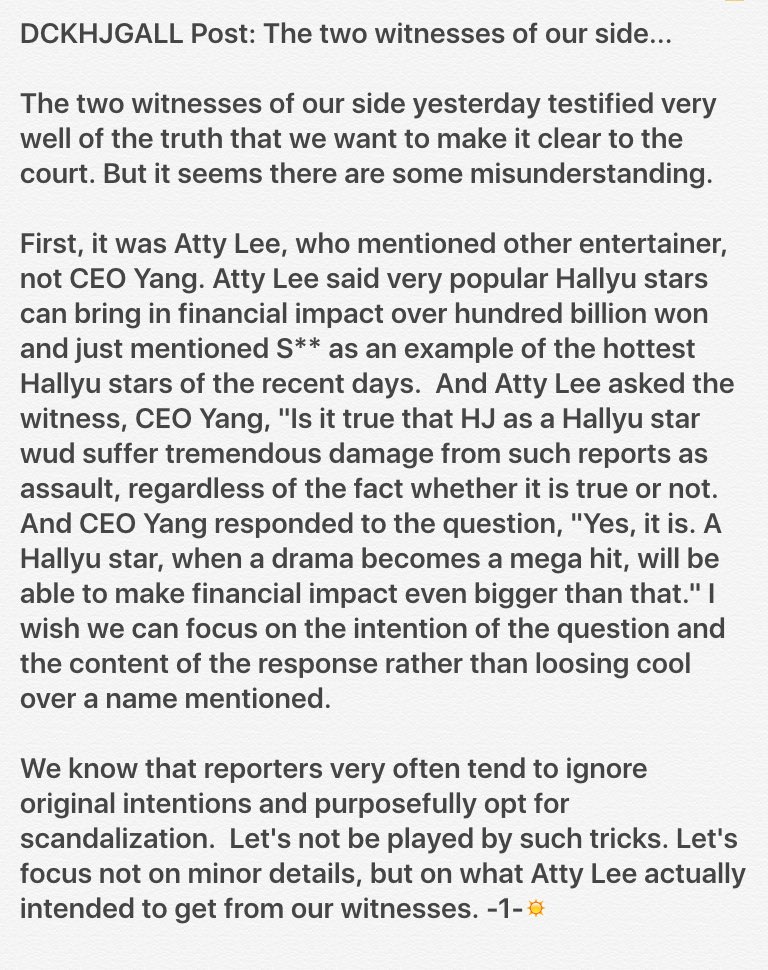 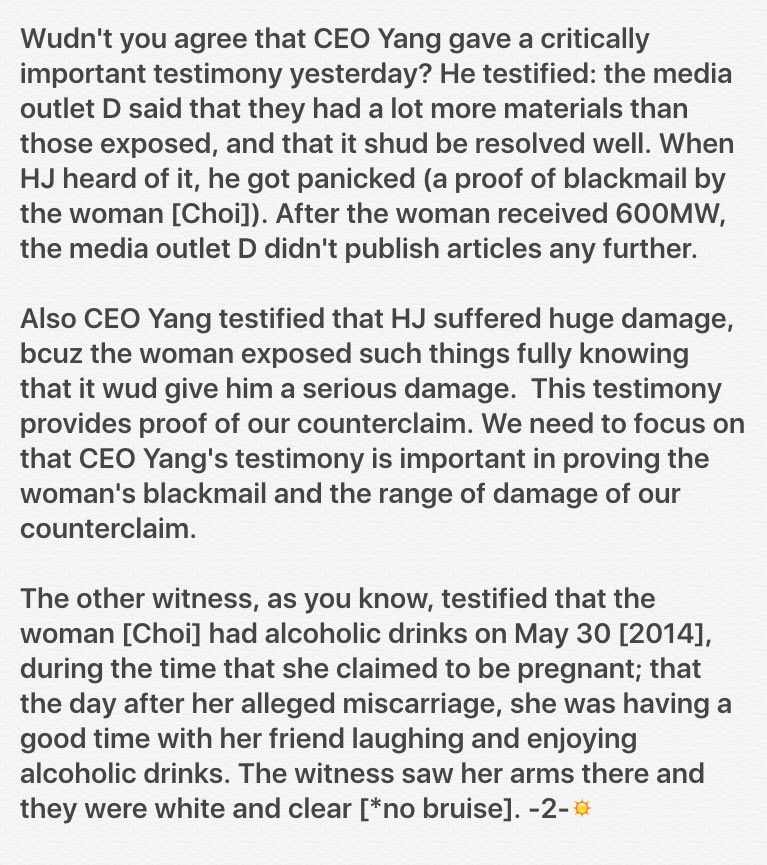 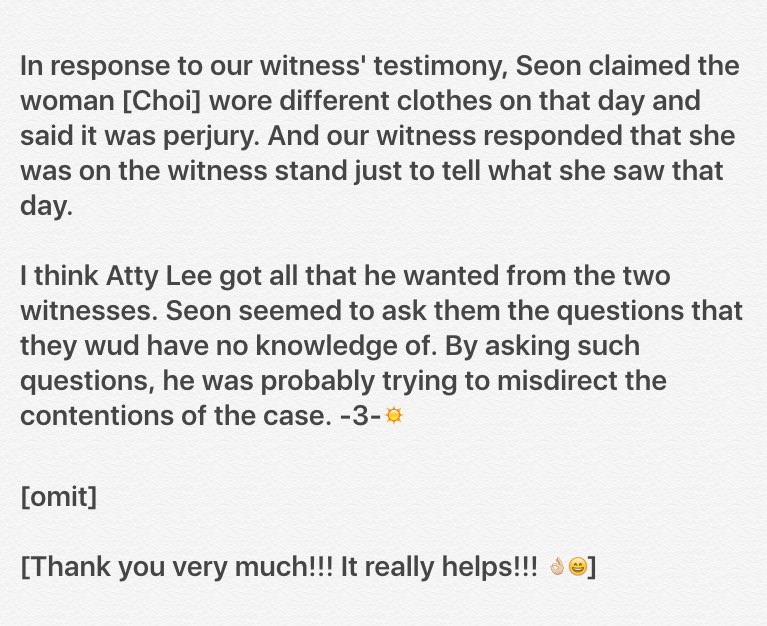 Correction: Per StarNews, on July 8, A side's witness(es) wl testify at 10AM, & A/HJ wl be questioned in PM. [apologies for the mistake]

Scandal made it difficult for HJ to carry out activities, and still the situation now… Fans left… Choi Hye Mi!! pic.twitter.com/XZy4yOJntn

HJ's side "A pregnant? She was seen drinking" vs A side " she was wearing different colored clothes from what was said" Cr Starnews

(1) According to KERep "In 2014 when D Media published an exclusive report on the alleged assault by HJ, KE called D pic.twitter.com/WyMJhFwVQ7

According to KE Rep “In 2014 when D Media published an exclusive report on the alleged assault by HJ, KE called D to seek explanation since it was a one-sided report which would impact on HJ badly & such action should stop. But D representative said based on the amount of information they had received what was published was just tip of the iceberg.  There are info on pregnancy, assault, miscarriage, etc., so it would be best for HJ to settle the issue quickly.  HJ was really scared so even though request from the bitch was unreasonable, he had gone ahead to pay 600mil won Only when the payment was made then those info were not published. Cr 无公害芋头

Looks like that bitch's name is openly reported in media report!! pic.twitter.com/D00soThvqY

(1) KE Rep Yang : Choi Hye Mi only had those supposedly 'diagnosis report' as her claim against HJ. In actual fact pic.twitter.com/AABXccsJar

KE Rep Yang : Choi Hye Mi only had those supposedly ‘diagnosis report’ as her claim against HJ. In actual fact, there wasn’t any proper medical records or truth in her claims. Because of Choi Hye Mi’s malicious accusations, HJ had shingles & suffered panic disorder. For 5+ years that we had worked tog, I had never seen him like this”

(1) AttyLee : Due to all those alleged assault, miscarriage media reports, for the last 3 years HJ had suffered pic.twitter.com/OOvnrk9lpK

Atty Lee : Due to all those alleged assault, miscarriage media reports, for the last 3 years HJ had suffered  tremendously; concerts in Mexico & Beijing were cancelled resulting loss of 300mil won of earnings; loss of Lotte renewal contract of 600mil won plus loss of 16ep drama series worth several billion won these losses are within our compensation demand. Cr 无公害芋头

I'm feeling both sad & angry right now! That BITCH CHOI HYE MI must pay for her evil deeds & that DISPATCH S.O.B. should be charged too😡😡😡😡😡

Next round of hearing is scheduled on 8 Jul. HJ expected to attend the hearing. 🙏🙏🙏

Witness Lee "In May2014 at Jaksal Chicken, saw Bitchoi & her friend, HJ & a male friend drank a lot of alcohol" https://t.co/TFjT4kYdMp

In Jun2014, saw Choi at pub, with 2friends.That day was day after miscarriage but Choi was drinking alcohol merrily https://t.co/B5IldHVw2F

Jun2014, Choi wore a white top & beige cardigan. When Choi took off her cardigan there wasn't any bruises on her arm https://t.co/yqF9IjzENu

Pls note there was no mention of SJK at all during hearing yet those trash media anyhow add it in! WTF!

Accroding to an article, HJ was scheduled to appear on a TV drama in China…

①HJ had suffered from panic disorder but send text message to Choi as usual so as not to be found his fear.

②But Choi found it and requested 1.6 billion in additional to 600 million.

KHJ and Choi will meet in court in July, with face to face questioning

'Litigation battle' – HJ and Bitchoi will appear in Court next month (8Jul) https://t.co/UmBBBfsjlJ

CH translation by 无公害芋头 on what the other witness L had told the Court today on what she saw on 2Jun14 about Bitchoi pic.twitter.com/Vy6ibO0ySy

최혜미 – putting THE FACE to the name that was finally published in media today! The face of a lying greedy bitch aka 🐍 pic.twitter.com/sxHh3r2nNr

(1) Background of Witness L: used to be a teacher in university and now is a home-maker. Her friend is fan of HJ pic.twitter.com/tIVncrd5Sd

Background of Witness L: used to be a teacher in university and now is a home-maker. Her friend is fan of HJ  when she read about Choi’s claims of assault, miscarriage by HJ, as one of the witnesses she took the initiative to contact AttyLee and hope to appear in Court as witness. (Thank you, Ms L

Cr 无公害芋头 for the translation

WitnessL said that what she said on the witness stand are the truth. If I lied then punished me for perjury! Cr无公害芋头 pic.twitter.com/NEdESCH3w0