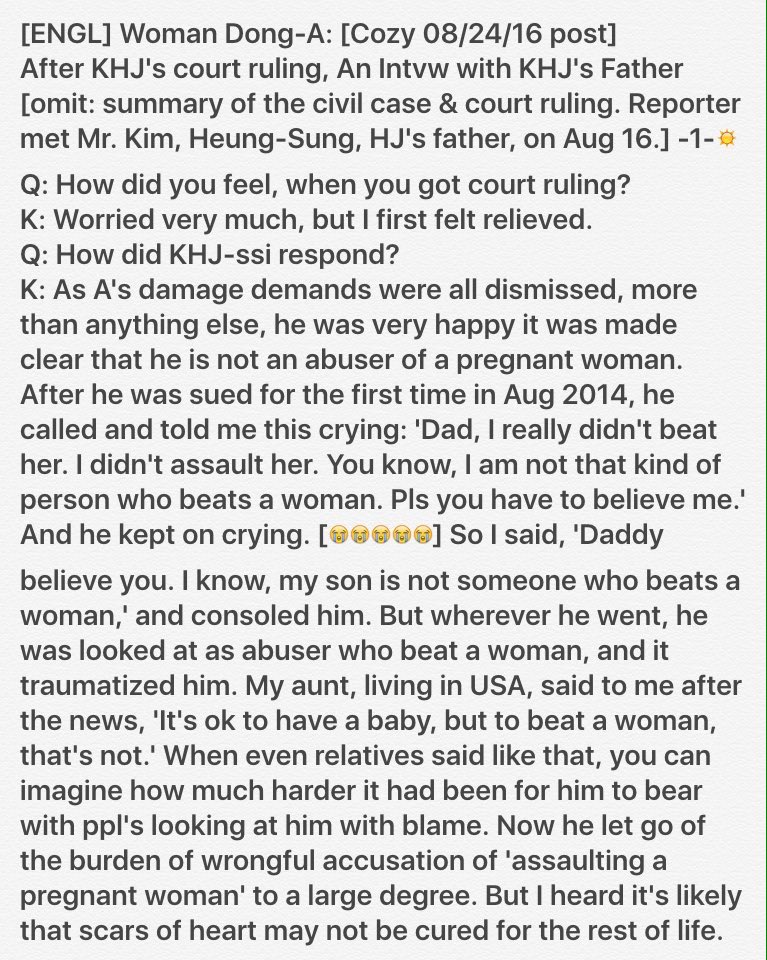 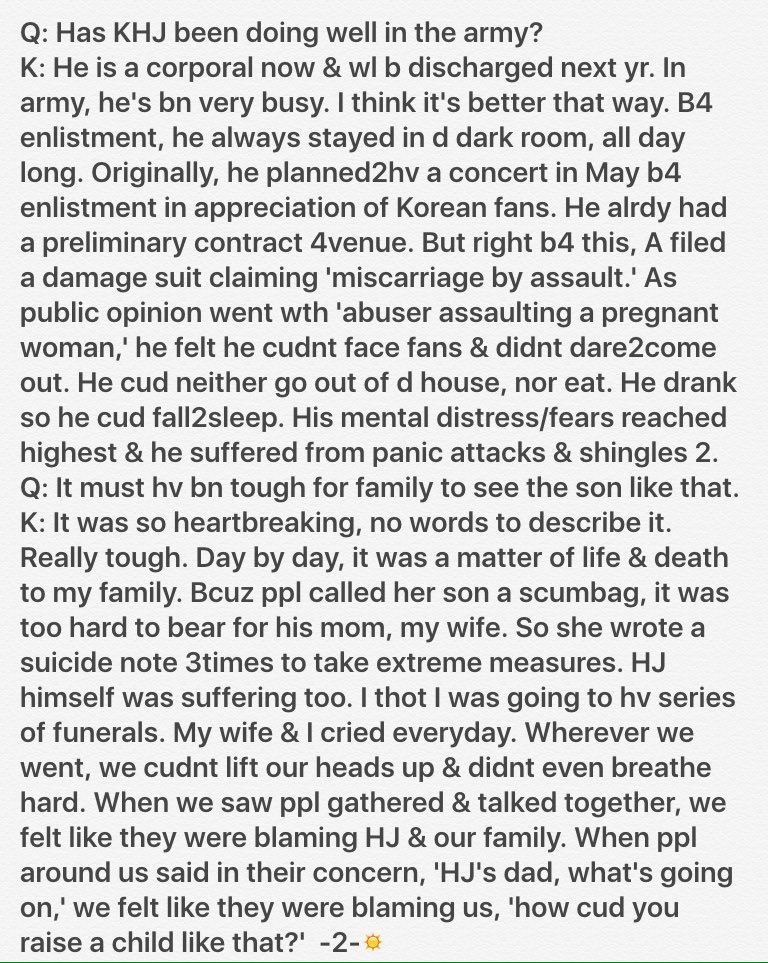 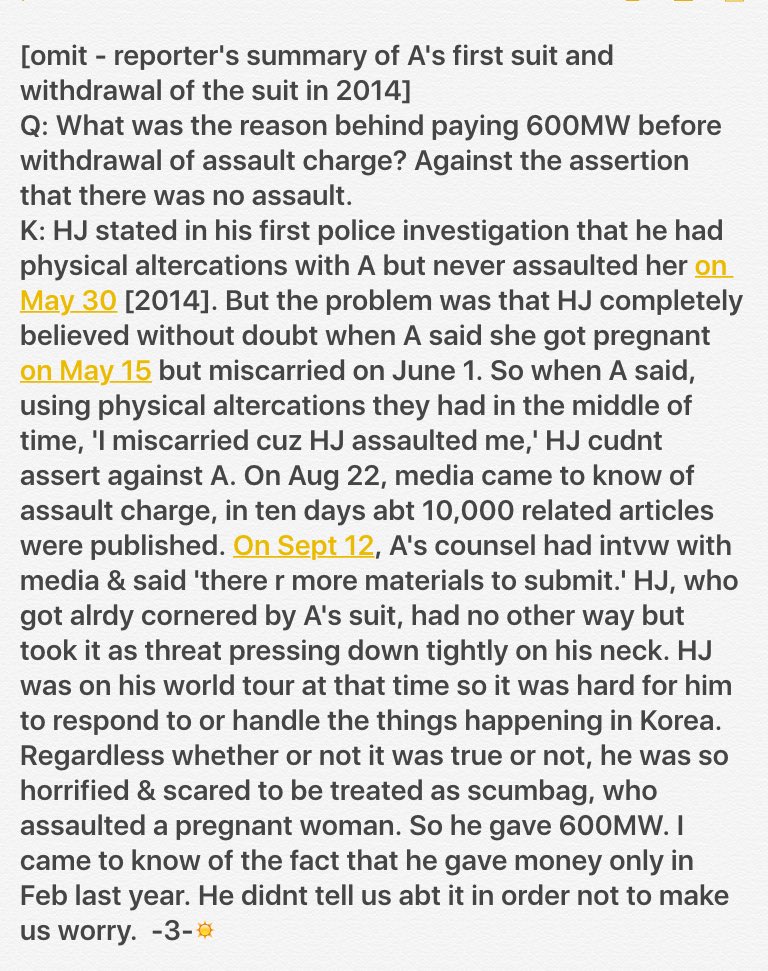 Bitchoi submitted appeal for the 100mil won compensation ruling on 24Aug..HJ also has submitted an appeal on 25Aug https://t.co/zPetR7Cy3y

HJ vs ex-gf – legal battle continues with appeals from both sides https://t.co/YTq4VmOgNw

HJ vs ex-gf, appeal to counter-appeal, second round begins https://t.co/YEfaLUvxI8

The truth is already out – bitch Choi lost her case becos she lied, falsely accused &amp; defamed KHJ over the l… https://t.co/AKi1fKVCq7

He interviewed for the September issue of a magazine.

Kim Hyun-joong has been in legal battle with his ex-girlfriend since 2014. Choi claimed she was abused and lost her baby and Kim countersued her for defamation. Choi then sued him for 1.6 billion won as compensation for her sufferings and Kim later claimed she should return 600 million that she took as settlement.

This battle ended with Kim’s victory. The court dismissed all of Choi’s claims and ruled that she pay Kim and his father 100 million won for damages to reputation.

Kim’s father recalled the time they went through until now as hell. He said, “Everyone called my son a low-life and his mother attempted the extreme, writing her will 3 times”.

The interview can be seen in the September issue of “Yeo-seong Dong”.

Per articles, HJ's father had exclusive intvw wth WOMAN DONGA 2b published on Aug22 n opened up how tough it has bn 4d family during d time😢

Per THE FACT, HJ's father wl talk abt how HJ feels and how he is after civil case win, and also the challenging times the family went thru.

Thou very heart breaking, stil its encouraging 2c media begin2bring HJ & his family's perspectives 2public. Hope we can c more of such rprts 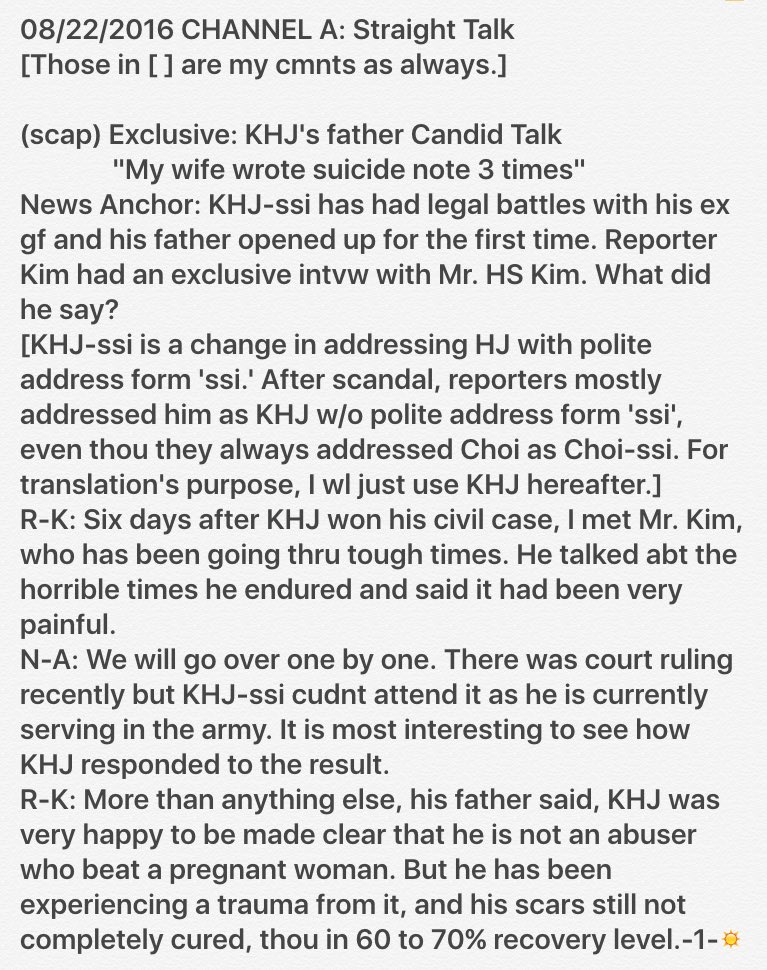 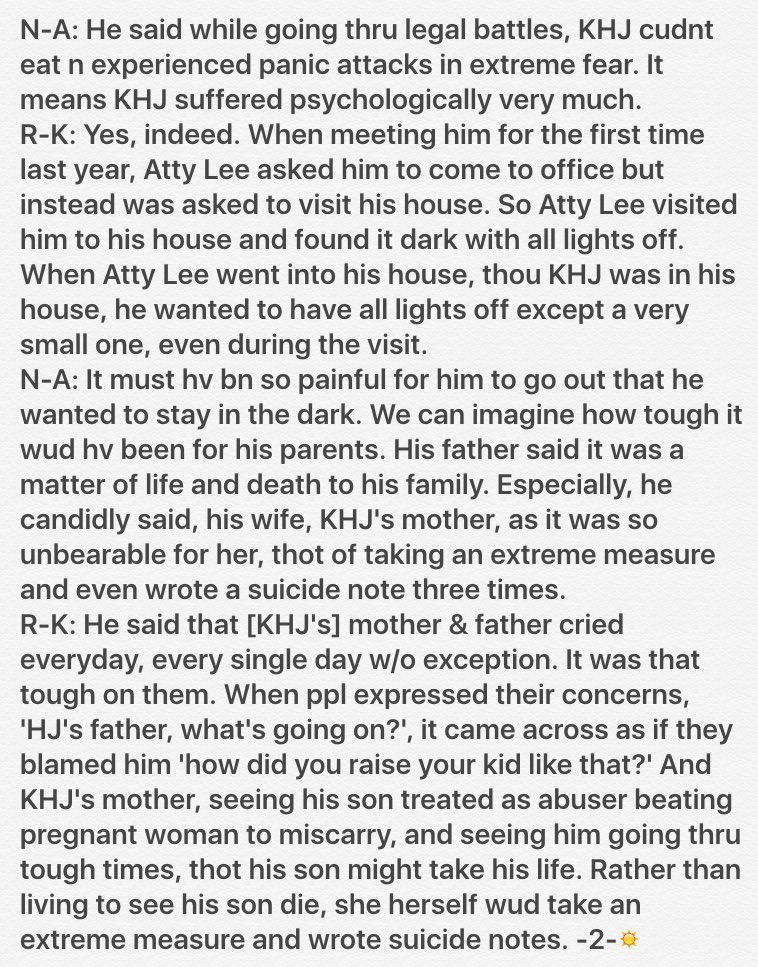 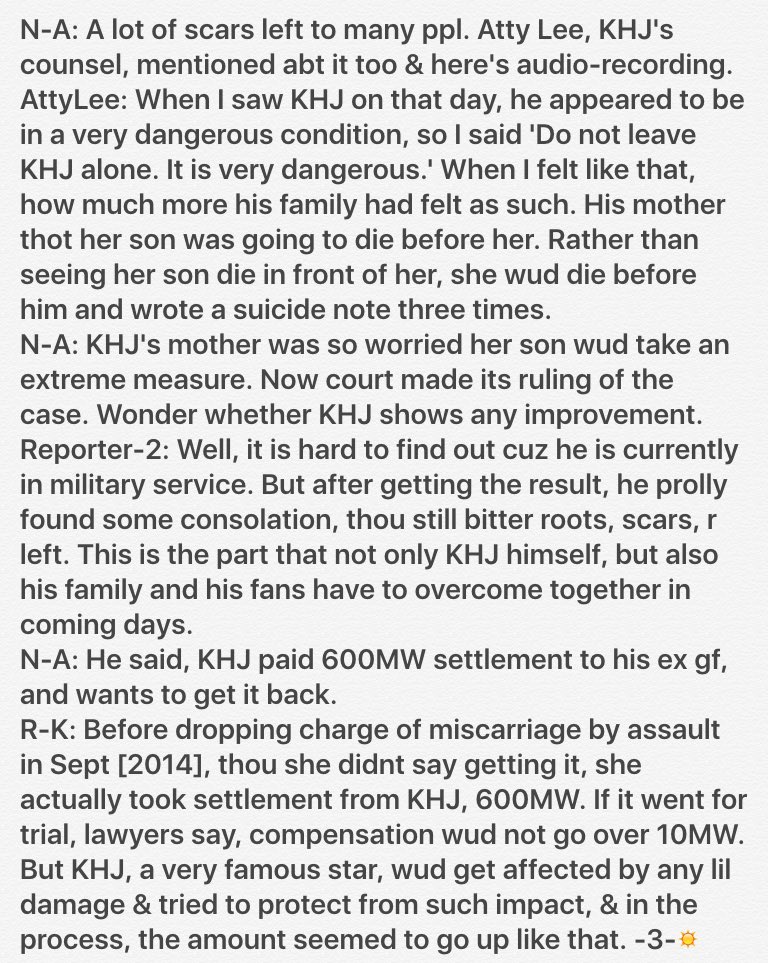 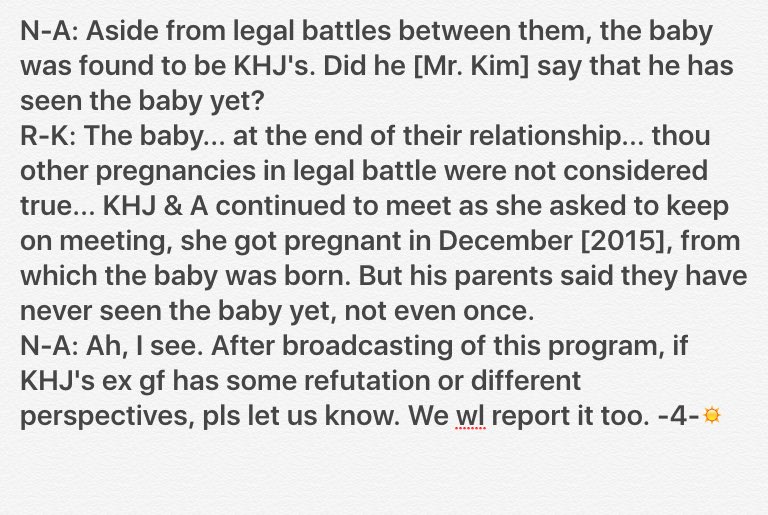 2. Anyone who keeps on complaining its too small is missing the point n discounting its significance. The point is its THE MAX! thx!

Sounds like HJ's side submitted a counter appeal today

KE said In this mutual counter appeal, they expect HJ to prevail again

Some netizen reactions from enews article about HJ's win on 10 Aug. translated fr ch
Not a great trans but anyway… pic.twitter.com/7E1aHCXMTH

I'd love for HJ's 5th anniversary album to make it to the top in celebration.. 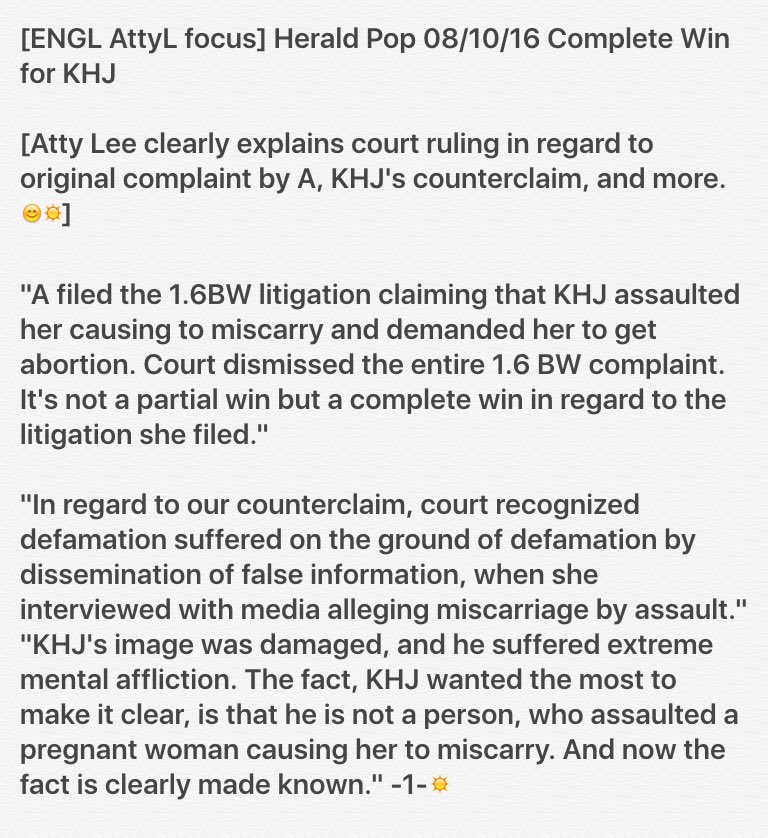 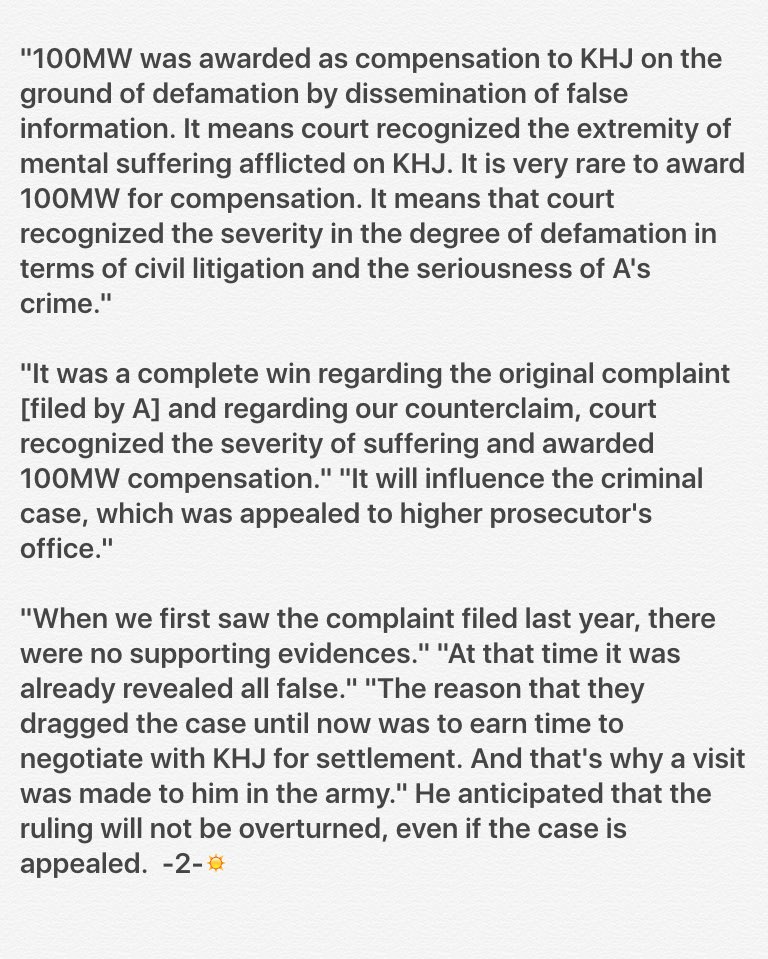 SECTION TV still said partial win! 😡 Someday they wl have to say the truth as it is! 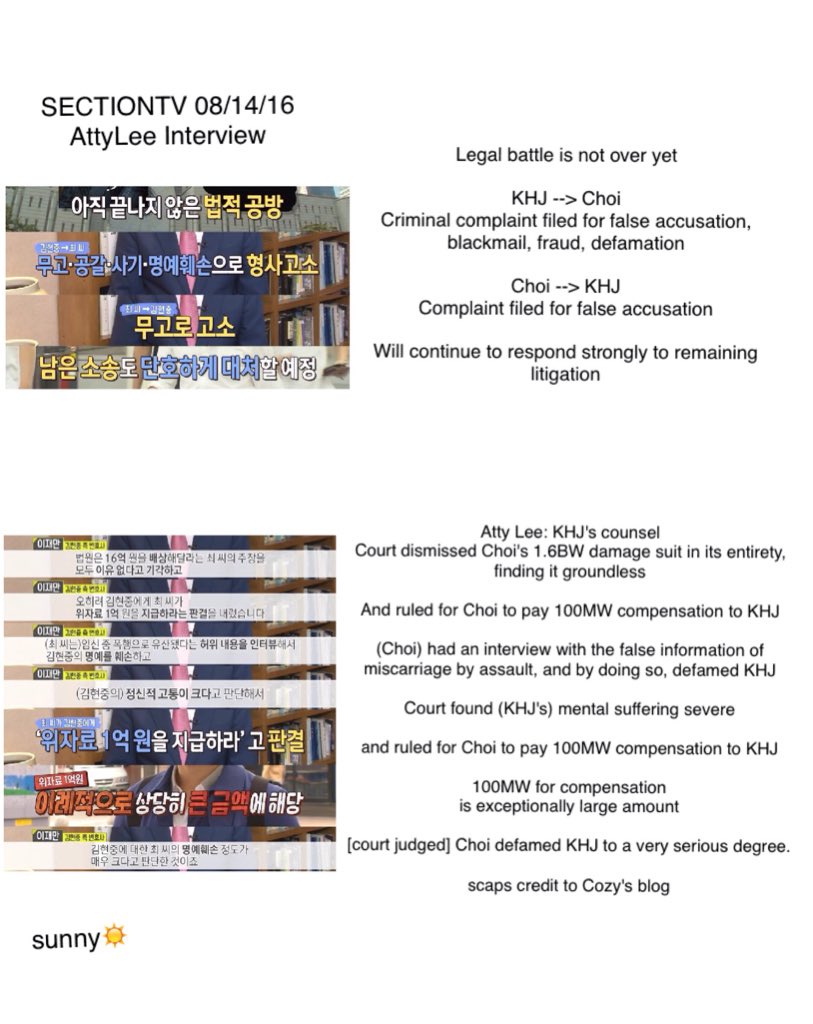 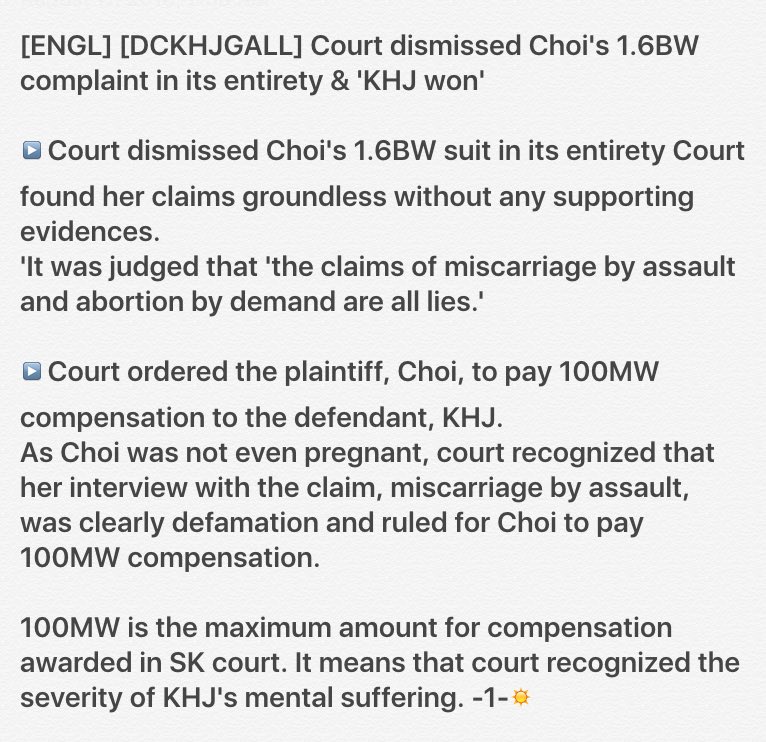 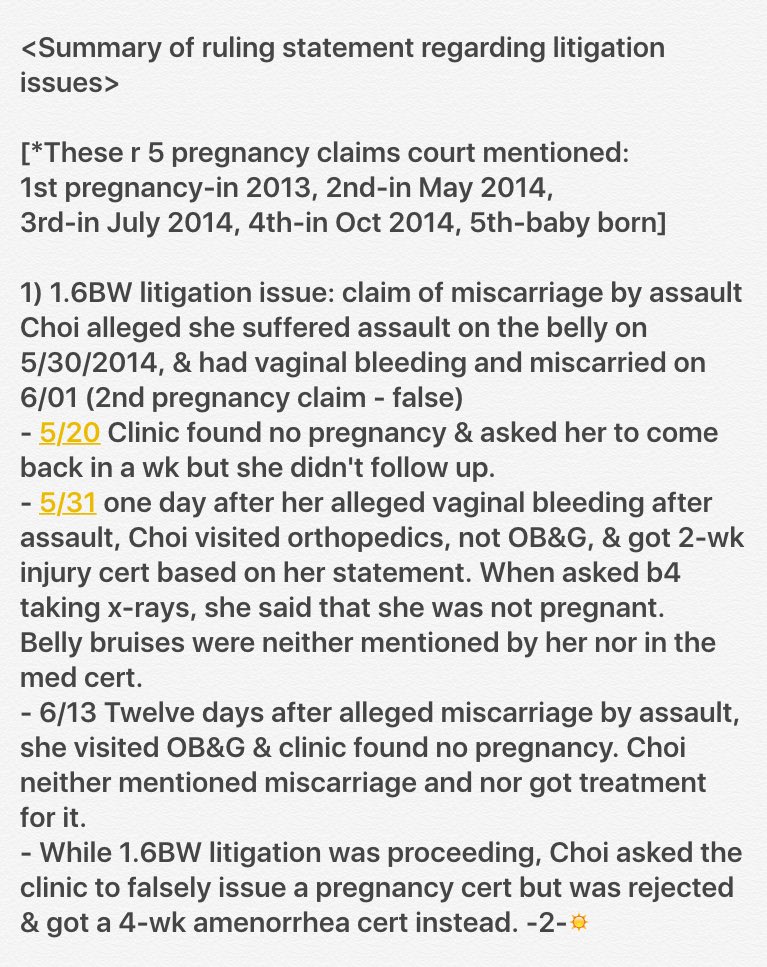 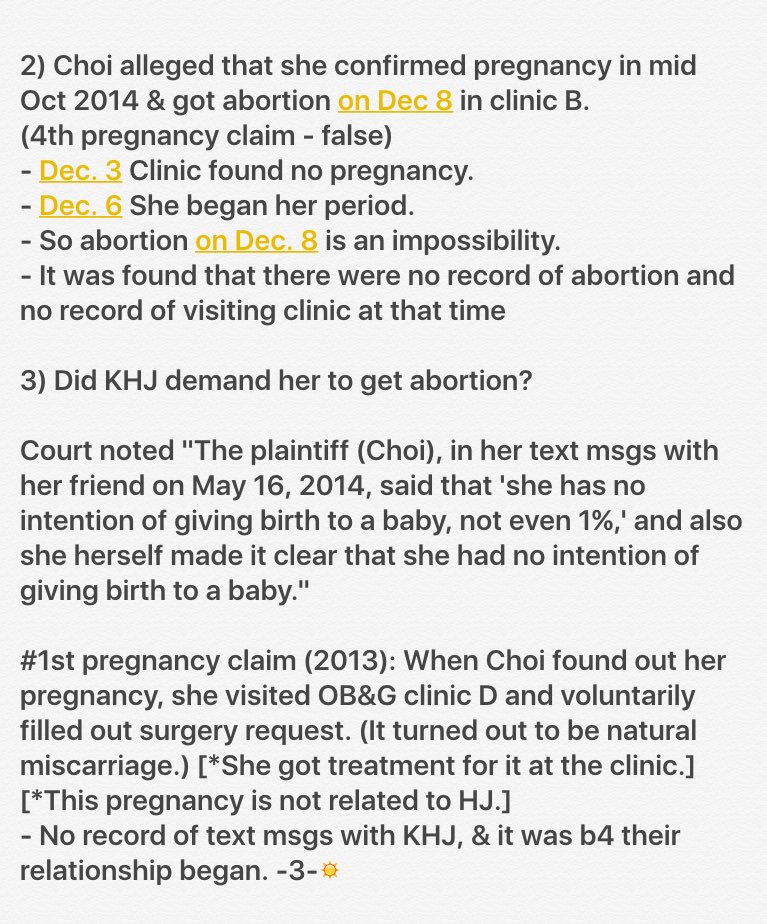 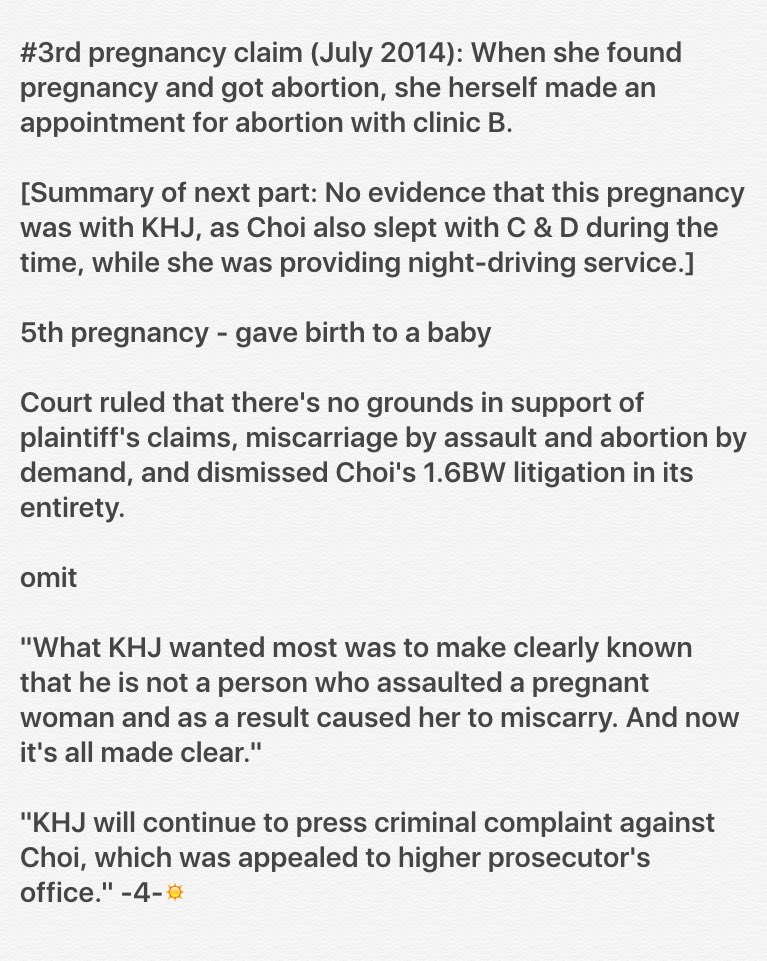 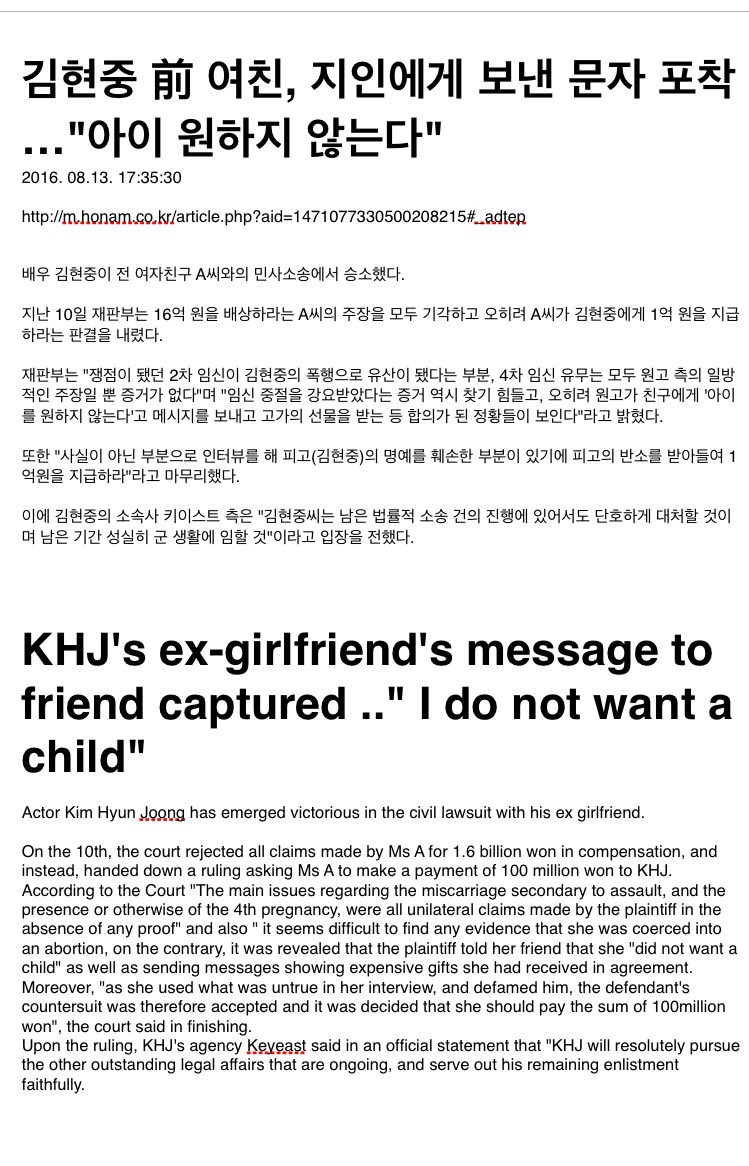 Since district prosecutor made ‘no charge’ decision, there was no charge made against 🐍 n the case cud not be brought to court. So HJ appealed to higher prosecutor’s office.

ps. Pls understand that for now I wont b able to answer such questions as ‘what happens, if….’ I wl collect such info only if it happens and until then I remain ignorant. Thank you as always and may truth win and justice be served! 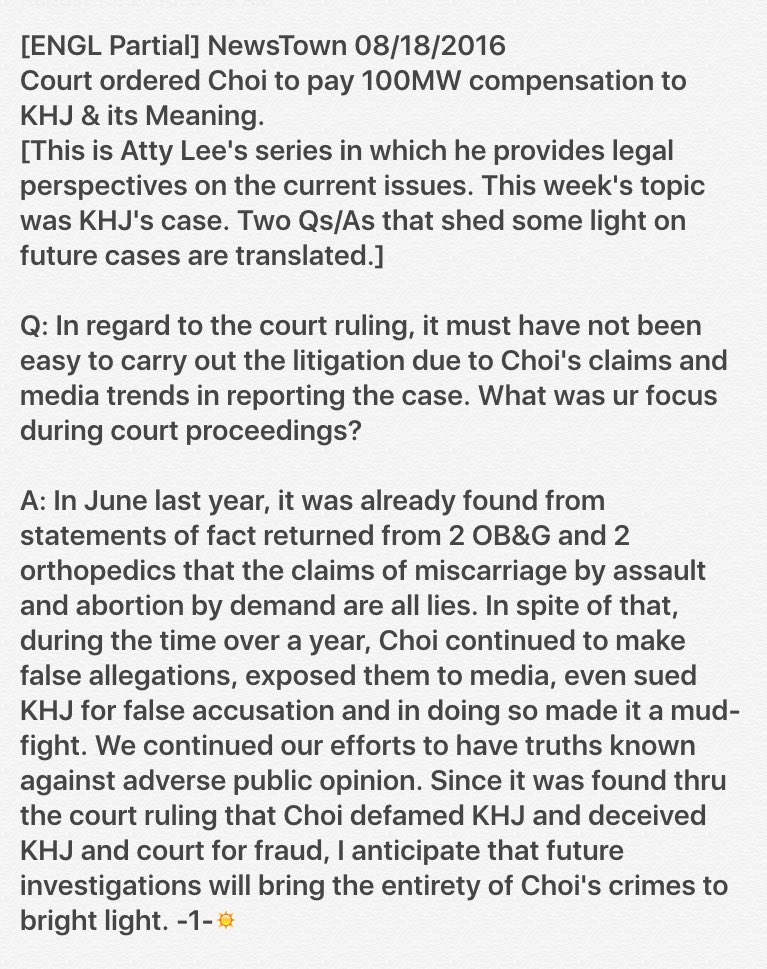 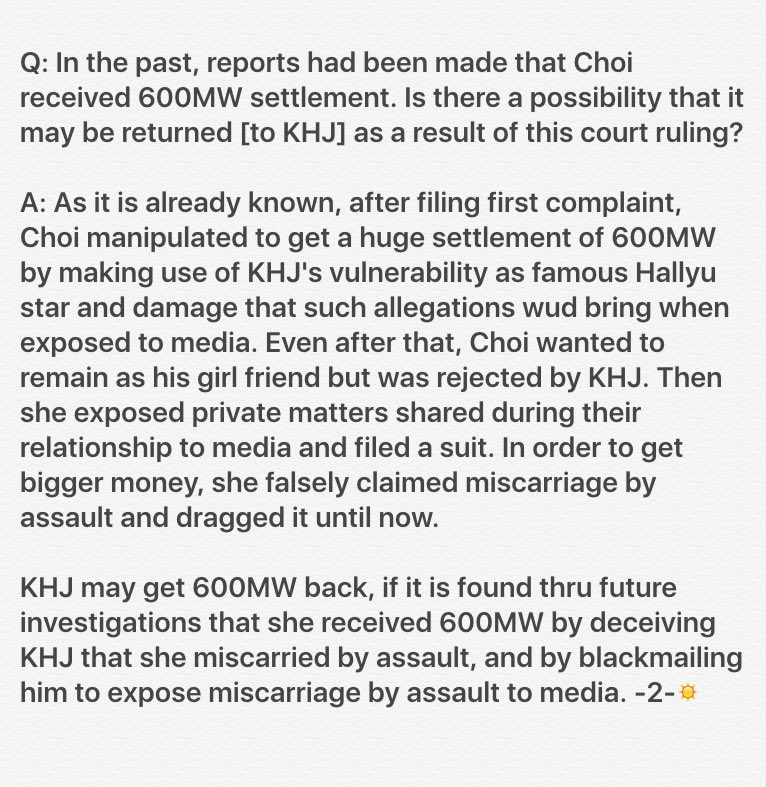 Translated the video for those who want to know…https://t.co/kqbLXa51pl pic.twitter.com/WoRxV7g3nu

Why do fans still rt netzbuzz, allkpoop & soompi💩????? I really wonder on who's side these fans are… it makes me wonder 😞

It sounds like the exclusive interview will be published in the Sep issue of Woman's DongA, a small portion was revealed today only.

HJ's dad said he wants to see his grandson, hasn't even been able to see him once

KHJ, on the verge of tears, said," I really didn't assault…" pic.twitter.com/L7Y9L7EtRr

Overview of the Korean law systemhttps://t.co/TscQqwFmIj

"Dad, I really didn't hit (her). I didn't assault her. I'm not the kind of person who hits a woman. Please believe me" HJ was sobbing..😢

The first time HJ went to police station he had already said that although he had an argument with Choi on 30.5.14 he did not assault her.