Pay attention at mark 1:46 on Part 14, we can see Hyun Joong Shook Hands with Tita Penny and Jackie Kim and recieved gifts from Jackie’s Mom and Aunt.

Most everyone knows Kim Hyun Joong; it seems media couldn’t get enough of him. Media knows he is a minefield of entertainment news: authentic, created or even invented. Recent full attention is focused on him particularly regarding his private life as much as what he doesn’t wish to show to the public.

A commonly acknowledged thing about him is that he shouldn’t be confused with somebody else with same or closely named performer. Kim Hyun Joong is not merely someone’s name but an image, almost a trademark. He sold commodities like beauty products, food, clothes, jewellery and services among others through endorsements.

Born in a year when Kpop was turning a new point from Seo Tai Jin’s music and spending teen years amidst the succession of Kpop groups doing dance music. Who knew that there is a niche waiting for him there several years later while dropping schooling thought not important in his life then. He had a direction for himself. This direction made him defy the odds turning his difficulties learning how to dance properly into skills, from playing an instrument in the band into the forefront of a 5 man group into a solo performer with dramas tucked in his belt as well.

Part of his charm was shielding his private life from being pried open by the curious public eyes as much as he could. His love life is said to be just the product of speculations, rumors and fan shipping efforts. He changed his marriage deadlines for himself many times.

It is often said celebrities are product of their talent agency’s marketing. It cannot be denied talent agency’ s magic fingers were at work all the time not only at him but so were the rest of the artists. It was just that different folks, different strokes. Or that same efforts produce different effects.

He is his own mould.

He is his own urban legend of sorts- having risen to fame according to his own accord.From childhood stories from his mama, his teenage exploits, to early attempts at starting stardom. His is the dream of countless young adults personified and fulfilled. Later, he will pontificate,’ go to school. My being a dropout followed me everywhere’. Hyun Joong shed the label, finished high school and started college. But stardom and career got in the way.

Does he need the theoretical and abstract studying when his plate is always full, all hands on? There is so much to do, so much to accomplish. Fans saw that, their celebrity had not cease to surprise them and every so often reinvented himself. Fans did not disappoint him or him them, although there were some who were.

As a celebrity, KHJ is no exception in experiencing road bumps here and there. He doesn’t get stucked there and manages to overcome.Like his brushes with a hated political figure’ s birthday party and getting the ire of netizens. Or when he went solo after the end of contract with DSP and getting the blame for the four others’ slower pace in getting back into the limelight. Or a disappointing drama local ratings. Taking these in a stride proved he is a tough cookie. They only made him turn to more productive ventures. His albums and concerts have not only done well but earned awards and recognition,too.

Like ordinary mortals, we all have our share of crises, however, not all personal mishaps are created equal. Some more devastating than others- or that they take longer to recuperate from. The significant thing though is healing, and most importantly bouncing back. Hyun Joong momentarily was in the dark only to show he is an able leader-soldier. He is now back in the warm embrace of his supporters. The ‘no one can bring a good person down’ works here. Not real life nor real time villains and certainly not a mud raking, mud slinging press can take down our man.

After all has been said and done, the dust finally settled, what is there to look forward to?
Kim Hyun Joong is still evolving. From the irrepressible youngster of the early years of 2000’s to the recently emerged manly looking and reserve nonetheless wiser army graduate,who is to say he had reached the end of his rope? As he has said, he is merely beginning the second half of his entertainment career. Like being back in a cocoon just waiting to spread his wings once more.

We can hardly wait to see what he will become in his next nth wind.


Kim Hyun-joong will resume his career by holding a fan meeting on April 29, according to his agency Monday.

“It has been four years since he held a fan meeting in 2013,” Keyeast Entertainment said. “We have decided to present the meaningful event for those who have believed and waited for Kim during his time in the military.”

The meet-and-greet will be called “Anemone,” and will take place at Olympic Park, Olympic Hall. He will take time to shake fans’ hands right after the fan meeting.

After serving 21 months, the singer-actor discharged from the military on Saturday. Over 1,500 fans from all over the world, including China and Japan greeted the star in front of the military camp.

Kim, 30, conveyed his state of mind on Sunday via his agency’s YouTube channel. “Thank you so much to those fans who came out to see me despite the cold,” he said. “I’ve decided to do my best to those who have put their trust in me.”

Kim Hyun-joong has been suffered a severe backlash after his ex-girlfriend charged him of physical assault in 2014. The legal battle between her and Kim is still ongoing. 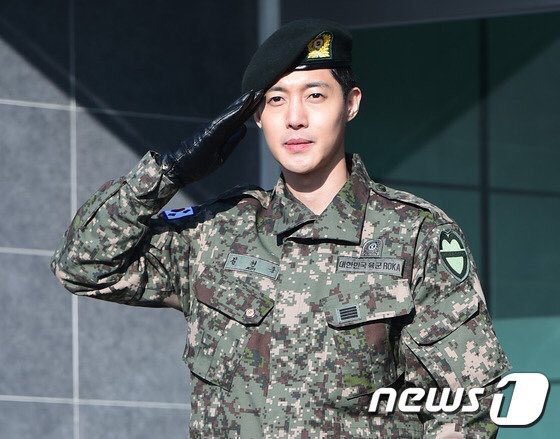 South Korean actor and singer Kim Hyun Joong was officially discharged from his compulsory military service Saturday, after completing 21 months in the army.

“I feel like I’m starting the second half of my life,” the “Boys Over Flowers” actor reportedly told the media shortly after he finished his service. “I still have a lot of worries and fear. However, I felt many things, learned how to overcome, and thought a lot while I was in the army. I hope people will trust me more and watch over me.”

The leader of boyband SS501 was recruited in the Goyang city of Gyeonggi-do province and had been serving in the army as an active-duty soldier since May 2015. Kim got a warm welcome from over 1,500 fans — from South Korea, China, and Japan — who braved the cold to welcome the star with posters and sign boards.

Overwhelmed by the love and support he received over the period, Kim said: “I have gotten a lot of courage in the 21-month period. I want to thank the instructors, the officials and all of my fans.”

The “Unbreakable” singer was asked about his future plans and he indicated that fans may be in luck as Kim could officially greet them soon. He reportedly said: “The very first thing I need to do is meet my parents. I met them while I was on leave, but I want to greet them formally after being discharged. I can’t give any details about plans for activities, but I think I will greet fans soon.”

With BIGBANG’s T.O.P and JYJ’s Junsu having started their military service Thursday, the media also asked Kim for his thoughts on their time in the service, to which he replied: I hope [they] have strength and fulfill their military duty well.” 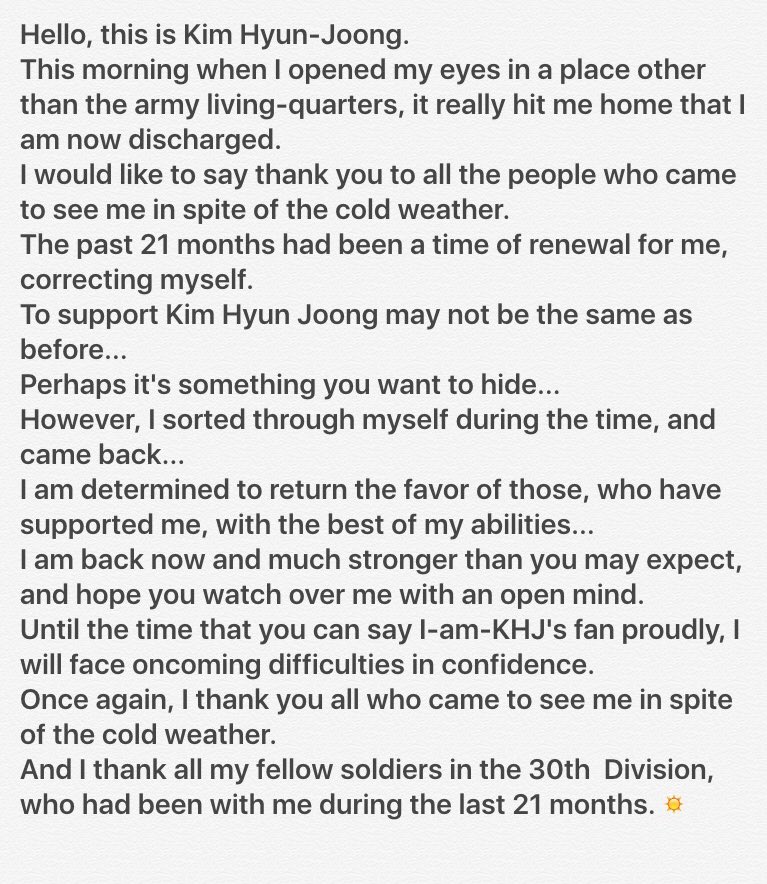 Kim Hyun Joong is officially back!

As soon as he was discharged, the singer had a short interview with the media. He expressed his honest thoughts and expectations after 21 months of serving in the army, saying: “I felt the feeling of starting the second half of my life.”

Furthermore, the heartthrob shared about what he had learned during his time in the army and hoped that fans would continue supporting him in the future.

He said: “I am still worried and fearful. However, I have been thinking a lot during the time serving the mandatory service. I hope that all of you will still trust and watch me more.”

He added: “I have gotten a lot of courage in the 21-month period. I want to thank the instructors, the officials and all of my fans.”

Over 1,500 fans from Korea, China, and Japan gathered to welcome their idol after a long hiatus.