Crowned as ‘Prince of Peru’?! Kim Hyun Joong, proven of His Popularity in South America

The visit of actor Kim Hyun Joong, who debuted with the group SS501, had gathered many people, attesting to his popularity.

Fans looking at the photo expressed, ‘Asia Flower Boy, also accepted in South America!’, ‘Look at those people’, ‘The Power of Hallyu Star Kim Hyun Joong’, ‘Popularity in Peru is amazing, how did they understand and become fans?’ and many other reactions.

Kim Hyun Joong held a solo fanmeeting in in Lima Peru, performing handsomely and talking happily together with fans for a delightful time.

Okuyama, a judge at the festival complimented the artist, stating, “He has the aura of James Bond, which is hard to find in Japan. “

During his award speech, Kim Hyun Joong revealed, “I was touched by the Japanese move, ‘Be with You’.” He added, “I would also like to act in a Japanese movie.”

Kim Hyun Joong will be heading to Laos, Vietnam, and other Southeast Asian countries from April 4 to April 8 to film for SBS’ upcoming variety show headed byKang Ho Dong. He is joined by actor Yoon Si Yoon and singer Kim Bum Soo, among others. The producer is Jang Hyuk Jae of “Family Outing“ fame and the show will have its members travel around to different countries completing missions. The show will air after the finale of “K-Pop Star Season 2.”

7 KHJ-fansites from Taiwan, Singapore, Japan, Thailand & Korea gathered to support Kim Hyun Joong who came back with a new variety show. We warmly welcome Barefoot Friends who look for the true meaning of life’

What better way to celebrate an album release than with fans? Well, Kim Hyun Joong did just that by hanging out with 10,000 fans who attended his fan meeting in Tokyo.

The multi-talented hallyu star held an event on the 4th at Nagano Sun Plaza in Tokyo, where he unveiled the music videos for his new tracks, such as “Tonight” and “Cappuccino”, from his third Japanese single album ‘Tonight’.

The gracious star also entered the crowd to shake hands with his fans who attended the event, spending 6 hours to greet and thank them. Unfortunately, an additional 8,000 fans waited outside as they couldn’t make it into the packed venue.

#HAPPYHYUNJOONGDAY 김현중 ‘나 살아있는 건’ Kim Hyun Joong, expressing his feeling of gratitude to his fans ‘The reason I exists is you, who keep loving and supporting me’, through the lyrics of the song.

And the ever adorable Gwiyomi version of KHJ

‘Unbreakable’ MV was released on 18th, is one of the songs from Kim Hyun Joong’s new album ‘Round 3′ which will be released digitally on 22nd July. ‘Unbreakable’ is a urban hip hop song combining both orchestral sound and Korea’s traditional instruments.

The lyrics “Hey ho, going in well’ also adds a unique touch Korea’s style. In addition, the song featured Jay Park‘s sexy rapping, which generates further attention from the netizens. The audio gives off a strong bouncing effect while visual gives off a chilling effect, as if you are watching a Hollywood blockbuster.

‘Unbreakable’ MV costs 300 million in production fees, with elements such as luxury cars, wushu, mask and eagle. Black, white and red colour contrasts also present an enriched visual, attracting more attention. Kim Hyun Joong dancing with a bare upper body is definitely another key attraction of the MV. Together with previously revealed teaser images, where he shows off his masculine body and tattoo, have caused a great stir among his female fans.

Kim Hyun Joong’s 3rd mini-album ‘Round 3′ will be released digitally on 22nd while physical album will be available on 29th July. Are you anticipating his comeback?

Check out ‘Unbreakable’ MV below!

As soon as Kim Hyun Joong′s first promotional song for Korea in two years was released, it conquered and grabbed attention, becoming an issue across the web.

On July 22, Kim Hyun Joong released the songs from his third mini album Round 3 through music sites. With the release, the album′s promotional single, Your Story, managed to top live charts on Mnet, Bugs and more online charts.

The release of the song was followed by a teaser for the music video, heightening expectations for the full version.

All six songs of the album have been garnering much support, with the music video for Unbreakable, released on July 18, beating out Infinite, A Pink, B2ST and other prominent idol groups on Mnet′s music video top 100 chart.

Kim Hyun Joong’s ROUND 3 is no. 1 in Billboard’s World Albums Chart!!

Kim Hyun Joong showed off his modeling skills as he is set to release his own sunglasses line with world renowned jewelry designer, Justin Davis.

Justin Davis has worked with celebrities like Paris Hilton, Eminem, Ayumi Hamasaki, and more. Kim Hyun Joong collaborated with the designer not just as a model, but he also contributed to the aesthetics of design planning.

The duo also worked together on a jewelry collaboration back in 2011.

A representative for Justin Davis commented, “For this collaboration, Kim Hyun Joong expressed his creative and modern style to show off his design skills. Even while working on the previous jewelry line he had great sense and ideas that he received praise for. During this sunglass collaboration I could easily feel that he showed off the same passion.“

Yoon Eun Hye won the Grand Prix in the category for best actress in a Korean drama. She said, “It is truly an honor to receive such an amazing award.”  As she was not a fluent Japanese speaker, she eventually made a mistake.  However, Japanese fans said it was cute and they liked that she was trying.

Bae Yong Joon also received the Grand Prix in the category of male actor in a drama. More impressively, he won the prestigious and honorable Daesang award, as well!  The actor said, “This is an even more significant time for me because I am able to stand in this spot today with the hoobaes that I like . . . Because of the surpassing talents my hoobaes have, I feel like there is an even brighter future for Hallyu.“

Kim Hyun Joong accepted the Grand Prix for best male solo artist in music.  The singer said, “I hope to try harder to become an artist who can contribute more and more to the development of Hallyu through singing, dancing, and acting.“

Back in July, he had released his third mini-album with the songs “Your Story” and “Unbreakable.”
Congratulations to these celebrities for their amazing wins!

Korean singer/actor Kim Hyun-joong has wrapped up an exclusive concert in Chiba, Japan with success.

Kim invited fans into the splendid stages with a medley of his tunes “Unbreakable” and “Gentleman,” both of which from his recent third mini-album “ROUND 3,” as well as early hit tunes “Break Down” and “Lucky Guy.”

In the meantime, Kim proved his status as top Hallyu star by scooping up the grand prize as the top male solo artist at Korean Entertainment 10th Anniversary Awards in Japan last Saturday.

Finally, this will be a historic day for the fans!

It has been revealed that for the first time in a long while, all the members of boy groupSS501 will be meeting in one place to participate in member Heo Young Saeng‘s exclusive concert on the 26th.  This will be the first time all five members are meeting together in three years since their 2010 “Destination” promotions and eventual solo activities.

During the period of SS501′s absence, the boys had kept saying, “We definitely have not disbanded,” yet they continued solo activities with separate agencies.  While there were times that three or four members gathered, this will be the first time that every single member will be present.

It is not yet certain what type of performance the boys might do on stage, but their fans have been yearning to see them together for a long time.

It appears that this rather impromptu stage appearance is due to Heo Young Saeng’s enlistment in the army five days after the concert.  On the 31st, he will be admitted into the Nonsan Training Center to serve the military as a conscripted police man.  This is why despite each member’s busy schedules, whether it involves filming for a drama or preparing for a Japanese concert, they created the time to stand on stage together.

Kim Hyun Joong at his drama showcase (Photo by http://www.newsen.com)

Korean star Kim Hyun Joong won at the Yahoo! Asia Buzz Awards for the fifth year in a row.

The actor and singer won the top idol award at the ceremony held at the Hong Kong Convention and Exhibition Centre in Hong Kong.

He bagged the Asia’s Top Buzz Male Popular Artist and the Top Buzz Korean Artist award in Yahoo! Hong Kong and Taiwan in 2010.

Kim Hyun Joong is currently shooting his new action drama “The Age of Feeling,” which will air on Korean channel KBS starting in January.

The actor attended the showcase for the drama on Dec. 2 along with co-stars Im Soo Hyang, Jin Se Yeon and Kim Kap Soo. The cast of the drama will also film in China.

In order to prepare for the drama, Kim Hyun Joong had to leave the SBS TV show “Barefooted Friends,” where he was a regular cast member.

Brief translation of weibo post (from Chinese)
“Last year during the Yahoo awards I uploaded a photo of flower wreaths sent by fans.This year because of drama shooting I was unable to attend… These are photos from my manager’s phone during last year’s Yahoo awards. Thanks to the fans for always being with me” 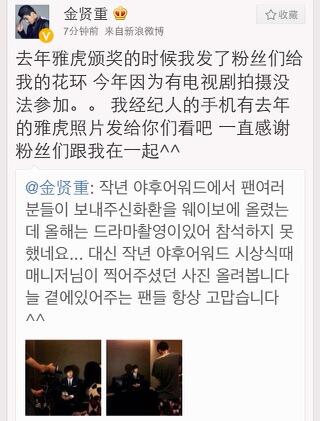 Kim Hyun Joong picked up an award for the fifth consecutive year at the ‘Yahoo Asia Buzz Awards 2013‘ held in Hong Kong. He was given the title of ’Top Buzz Korean Artist’, which awards the most searched Korean star on the portal site over the past year. The singer-turned-actor was unable to make it to the event on December 1 due to scheduling conflicts but made sure to thanks his fans.

Kim Hyun Joong shared, “I heard the news of my award while filming the drama, ‘Generation of Youth‘. Due to my filming schedule, I wasn’t able to attend the awards ceremony but thank you to all the fans for their unfailing support for the past five years… I will return the support with good acting and music.”

‘The Age of Feeling’ Gets Love Calls from America, Thailand and More

source: http://m.enewsworld.interest.me
KBS 2TV’s upcoming drama The Age of Feeling is already receiving much attention from the Asia market.The drama production company, Ray & Mo, announced on December 11, that The Age of Feeling received a lot of attention at ‘Asia TV Forum & Market (ATF)’, which was held in Singapore between December 3 through 6.

ATF is one of Asia’s biggest entertainment contents market, where companies gather to exchange information and to do business in regards to media content. This year’s ATF gathered about 4,000 people from over 60 countries.

The Age of Feeling received pre-orders from American and Thailand and is in the process of settling deals with other countries that have sent love calls.

The drama’s hero, Kim Hyun Joong, also received a lot of attention, as he is taking more steps to solidify his status as an actor after his success as a singer and an entertainer.

A rep from Ray & Mo stated, “We’ve been getting love calls and inquiries in regards to the copyright of the drama from all around the globe. The Age of Feeling is expected to lead another round of the hallyu wave.”

The Age of Feeling is an action-fantasy drama set in 1930s and will depict the story of love, loyalty and friendship of fighters from Korea, Japan and China.